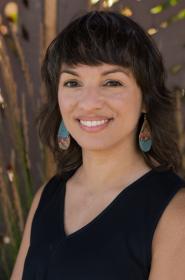 Mónica Guzmán is Senior Fellow for Public Practice at Braver Angels, a nonprofit working to depolarize America, host of Crosscut’s interview series Civic Cocktail, and author of I Never Thought Of It That Way: How to Have Fearlessly Curious Conversations in Dangerously Divided Times.

Before committing to the project of helping people understand each other across the political divide, Mónica cofounded the award-winning Seattle newsletter The Evergrey and led a national network of groundbreaking local newsletters as VP of Local for WhereBy.Us.

She was named one of the 50 most influential women in Seattle, served twice as a juror for the Pulitzer Prizes, and plays a barbarian named Shadrack in her besties' Dungeons & Dragons campaign.

I Never Thought of It That Way: How to Have Fearlessly Curious Conversations in Dangerously Divided Times (Hardcover)

“I can see this book helping estranged parties who are equally invested in bridging a gap—it could be assigned reading for fractured families aspiring to a harmonious Thanksgiving dinner.” —New York Times