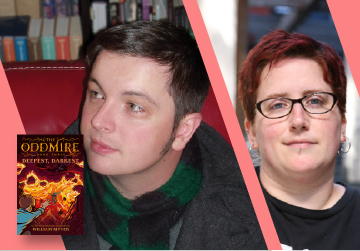 Third Place Books welcomes William Ritter—author of the New York Times bestselling, award-winning Jackaby series—for the latest installment in his first series for middle-grade readers, The Oddmire, Book 3: Deepest Darkest. He will be joined in conversation by local YA author and former bookseller Lish McBride, author of Pyromantic and the forthcoming novel, Curses.

The third adventure in the beloved fantasy series full of folklore and mayhem, from the creator of Jackaby.

Brothers Cole and Tinn—one human, one a goblin changeling—are determined to solve a mystery almost as old as they are: What happened to their long-missing father?

Joseph Burton vanished without a trace, leaving the baby boys’ mother to raise them alone. Some say he abandoned his family, others that he met foul play looking for a way to get rid of the changeling imposter. Cole is determined to finally push through the rumors and learn his father's fate.

With the help of their friends—Evie, expert on the creatures of the Wild Wood, and Fable, the indomitable half human, half fairy—Tinn and Cole set out on a dangerous quest to the deepest, most deadly limits of the Wild Wood. Meanwhile a shudder runs through the forest. Increasingly powerful earthquakes shake the land, sinkholes form, and the spriggans, trolls, and other creatures along their path speak of an ancient evil on the rise . . .

Praise for The Oddmire series. . .

"The Oddmire series' memorable, inspiring characters are full of heart and, combined with the enchanting magic surrounding them, form the strong core of a burgeoning fantasy classic."
—Booklist, starred review

“Ritter crafts a well-paced adventure filled with whimsy and peril, in which the bonds of family and love prove stronger than any spell or curse. With memorable characters—especially the irrepressible protagonists, who make a delightful team—and an atmospheric setting, this is a strong series opener.”
—Publishers Weekly

“Ritter’s brand of magic here is a gift for all readers of the fantastical—young and old alike.”
—The Mountain Times

William Ritter is an Oregon author and educator. He is the proud father of the two bravest boys in the Wild Wood, and husband to the indomitable Queen of the Deep Dark.The Oddmire is Ritter’s first series for middle-grade readers. He is also the author of the New York Times bestselling, award-winning Jackaby series for young adult readers. Visit him online at rwillritter.wordpress.com and find him on Twitter: @Willothewords.

Lish McBride is the author of funny and creepy Young Adult books such as Hold Me Closer, Necromancer; Necromancing the Stone; Firebug; Pyromantic, and Curses. She has published short stories in the Normal School, Tor.com, and the anthologies Cornered, What to Read in the Rain, Freaks & Other Family, and Kisses & Curses. She got her BFA in creative writing from Seattle University and her MFA from University of New Orleans. Her first book, Hold Me Closer, Necromancer, was an ALA Best Book for Young Adults title, Morris Award finalist, and won the Scandiuzzi Children’s Book Award. While she has no long term goals for world domination, she would like her own castle.