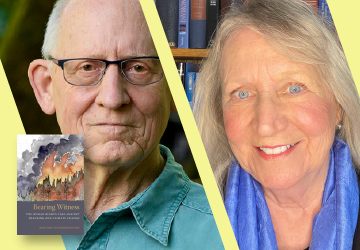 Third Place Books welcomes professor Thomas Kerns and philosopher, activist, and author Kathleen Dean Moore for a discussion of their anthology, Bearing Witness: The Human Rights Case Against Fracking and Climate Change. This important new anthology includes essays by leading climate writers such as Winona LaDuke, Robin Wall Kimmerer, and Sandra Steingraber and legal experts such as John Knox, Mary Wood, and Anna Grear give context to the controversy.

For the first time in history, an international human-rights court has weighed the evidence that fracking and climate change systematically violate human rights.

Fracking, the practice of shattering underground rock to release oil and natural gas, is a major driver of climate change. The 300,000 fracking facilities in the US also directly harm the health and livelihoods of people in front-line communities, who are disproportionately poor and people of color. Impacted citizens have for years protested that their rights have been ignored.

On May 14, 2018, a respected international human-rights court, the Rome-based Permanent Peoples’ Tribunal, began a week-long hearing on the impacts of fracking and climate change on human and Earth rights. In its advisory opinion, the Tribunal ruled that fracking systematically violates substantive and procedural human rights; that governments are complicit in the rights violations; and that to protect human rights and the climate, the practice of fracking should be banned.

The case makes history. It revokes the social license of extreme-extraction industries by connecting environmental destruction to human-rights violations. It affirms that climate change, and the extraction techniques that fuel it, directly violate deeply and broadly accepted moral norms encoded in the Universal Declaration of Human Rights.

Bearing Witness maps a promising new direction in the ongoing struggle to protect the planet from climate chaos. It tells the story of this landmark case through carefully curated court materials, including searing eye-witness testimony, groundbreaking legal testimony, and the Tribunal’s advisory opinion. Essays by leading climate writers such as Winona LaDuke, Robin Wall Kimmerer, and Sandra Steingraber and legal experts such as John Knox, Mary Wood, and Anna Grear give context to the controversy. Framing essays by the editors, experts on climate ethics and human rights, demonstrate that a human-rights focus is a powerful, transformative new tool to address the climate crisis.

“This book is a devastating indictment of the controversial practice of fracking for oil and gas and more broadly the legal responsibility of coal, oil, and gas corporations for polluting the planet with vast volumes of greenhouse gases. It is crystal clear that in a world dedicated to human rights and gripped by an unprecedented climate emergency, fossil fuels must be phased out as rapidly as possible.”
—David Boyd, United Nations Special Rapporteur on human rights and the environment

"This extraordinary compendium is part legal analysis, part testimonial, part poetry. A cri de cœur, it is required reading for anyone seeking to understand the nature of fracking and its multitudinous impacts from a legal and moral perspective, which it then places in the context of climate change. In clear yet analytically rigorous language, it examines these complex and fraught issues from multiple perspectives, blending old and new legal frameworks, to imagine and develop more effective forms of advocacy. With contributions from some of the greatest legal thinkers of our day, it offers a roadmap for the present as we try, against the odds, to preserve the planet for the future."
—Erin Daly, Director, Global Network for Human Rights and the Environment

Kathleen Dean Moore is a moral philosopher, environmental activist, and award-winning author or editor of a dozen books, including Moral Ground and Great Tide Rising. Her growing alarm at the devastation of nature led her to leave her longtime position as Distinguished Professor of Environmental Philosophy at Oregon State University to write and speak about the moral urgency of climate action. She writes from Corvallis, Oregon, and Chichagof Island, Alaska. www.riverwalking.com