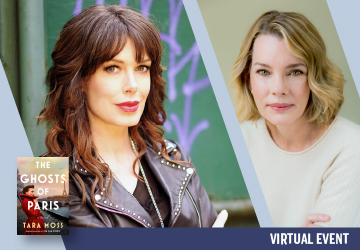 “Ingenious, spirited, feminist. . . Billie Walker is the most enjoyable heroine I’ve come across in a long time.” —Cecila Eckbäck

Third Place Books welcomes author, activist, and model Tara Moss for a presentation of her novel, The Ghosts of Paris, the next installment in the Billie Walker series after the international bestseller The War Widow. Continuing to dig through the wreckage of World War II in The Ghosts of Paris, Billie returns to Paris and the difficult memories she must confront in the city of lights. Moss will be joined in conversation by author Fiona Davis.

A thrilling tale of courage and secrets set in postwar Paris, in which a search for a missing husband puts journalist Billie Walker on a collision course with an underground network of Nazi criminals.

It’s 1947. The world continues to grapple with the fallout of the Second World War, and former war reporter Billie Walker is finding her feet as an investigator. When a wealthy client hires Billie and her assistant Sam to track down her missing husband, the trail leads Billie back to London and Paris, where Billie’s own painful memories also lurk. Jack Rake, Billie's wartime lover and briefly, husband, is just one of the millions people who went missing in Europe during the war. What was his fate after they left Paris together?

As Billie's search for her client's husband takes her to both the swanky bars at Paris's famous Ritz hotel and to the dank basements of the infamous Paris morgue, she'll need to keep her gun at the ready, because something even more terrible than a few painful memories might be following her around the city of lights...

“Billie Walker—a feisty and flamboyant combination of Martha Gellhorn and Sherlock Holmes in 'Fighting Red' lipstick—and her adventures continue, leading her back to London and Paris in this crackling post-war noir adventure— where ghosts from Billie’s past are as vivid as the bad guys she’s chasing.”
—Susan Elia MacNeal, author of the Maggie Hope series and Mother Daughter Traitor Spy

"Billie Walker is the type of heroine I'd love to befriend: resourceful, clever, adventurous, and a true fashionista."
—Ellen Keith, author of The Dutch Wife

“Saucy leading lady Billie Walker [is] a war reporter-turned-private investigator in post-WWII Australia who—much like Moss herself—refuses to be defined or held back by any man on her quest for justice."
—The Boston Herald

Tara Moss is an internationally bestselling author, human rights activist, documentary and podcast host, and model. Her crime novels have been published in nineteen countries and thirteen languages, and her memoir, The Fictional Woman, was a #1 international bestseller. Her most recent novel is the The War Widow, which was also an international bestseller and is the first book in the Billie Walker series. Tara is a UNICEF Goodwill Ambassador and has received the Edna Ryan Award for significant contributions to feminist debate and for speaking out on behalf of women and children. In 2017, Tara Moss was recognized as one of the Global Top 50 Diversity Figures in Public Life. In 2021, she reported, wrote, and hosted the Audible Original true crime podcast The Man in the Balaclava. Moss lives in Vancouver with her family. (Photo credit: Berndt Sellheim)

Fiona Davis is the New York Times bestselling author of several novels, including The Dollhouse, The Address, The Masterpiece, The Chelsea Girls, The Lions of Fifth Avenue, and The Magnolia Palace. She lives in New York City and is a graduate of the College of William & Mary in Virginia and the Columbia Journalism School. (Photo credit: Deborah Feingold)