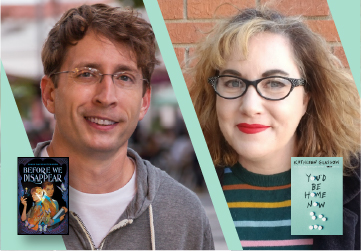 Third Place Books is thrilled to welcome Shaun David Hutchinson—acclaimed YA author of We Are The Ants and A Complicated Love Story Set in Space—and Kathleen Glasgow—bestselling author of Girl in Pieces—for a spectacular double-header evening featuring their new novels for teens, Before We Disappear and You'd Be Home By Now.

About Before We Disappear. . .

The Prestige meets What If It’s Us in Before We Disappear, a queer ahistorical fantasy set during the 1909 Seattle Alaska–Yukon–Pacific Exposition, where the two assistants of two ambitious magicians find themselves falling in love amidst a bitter rivalry designed to tear them apart.

Jack Nevin’s clever trickery and moral flexibility have served him well his entire life—making him the perfect assistant to the Enchantress, one of the most well-known stage magicians in early-twentieth-century Europe. Without Jack’s steady supply of stolen tricks and copycat sleight-of-hand illusions, the Enchantress’s fame would have burned out long ago—not that she would ever admit it.

But when they’re forced to flee the continent for America, the Enchantress finds a new audience in Seattle at the 1909 Alaska–Yukon–Pacific World’s Fair Exposition. She and Jack are set to make a fortune until a new magician arrives on the scene. Performing tricks that defy the imagination, Laszlo’s act threatens to overshadow the Enchantress and co-opt her audience. Jack has no choice but to hunt for the secrets behind Laszlo’s otherworldly illusions—but what he uncovers isn’t at all what he expected.

What makes Laszlo’s tricks possible is, unbelievably, a boy that can seemingly perform real magic. Wilhelm’s abilities defy all the laws of physics. His talents are no clever sleights-of-hand. But even though Laszlo and Wilhelm’s act threatens to destroy the life Jack and the Enchantress have built, Jack and Wilhelm have near-instant connection. As the rivalry between the Enchantress and Laszlo grows increasingly dangerous and dire, Jack finds he has to choose between the woman who gave him a life and the boy who is offering him love. It's a new star-crossed romance about the magic of first love from acclaimed author Shaun David Hutchinson.

From the New York Times bestselling author of Girl in Pieces comes a raw, deeply personal story about a town ravaged by the opioid crisis, and a teenaged girl struggling to find herself amidst the fallout of her brother's addiction.

For all of Emory's life she's been told who she is. In town she's the rich one--the great-great-granddaughter of the mill's founder. At school she's hot Maddie Ward's younger sister. And at home, she's the good one, her stoner older brother Joey's babysitter. Everything was turned on its head, though, when she and Joey were in the car accident that killed Candy MontClaire. The car accident that revealed just how bad Joey's drug habit was.

Four months later, Emmy's junior year is starting, Joey is home from rehab, and the entire town of Mill Haven is still reeling from the accident. Everyone's telling Emmy who she is, but so much has changed, how can she be the same person? Or was she ever that person at all?

Mill Haven wants everyone to live one story, but Emmy's beginning to see that people are more than they appear. Her brother, who might not be "cured," the popular guy who lives next door, and most of all, many "ghostie" addicts who haunt the edges of the town. People spend so much time telling her who she is--it might be time to decide for herself.

A journey of one sister, one brother, one family, to finally recognize and love each other for who they are, not who they are supposed to be, You'd Be Home Now is Kathleen Glasgow's glorious and heartbreaking story about the opioid crisis, and how it touches all of us.

Shaun David Hutchinson is the author of numerous books for young adults, including We Are the Ants, A Complicated Love Story Set In Space, and the YA memoir Brave Face. When he’s not writing, he’s probably baking or playing video games. He currently lives in Seattle and can be found online at shaundavidhutchinson.com.

Kathleen Glasgow is the New York Times bestselling author of Girl in Pieces, You'd Be Home Now, and How to Make Friends With the Dark. Her books have been named to 'Best of' lists by the New York Public Library, EW.com, TeenReads, Barnes and Noble, YALSA, TAYSHA, Bank Street Books, and more. Girl in Pieces was a Target Book Club pick, and an Amelia Walden Award honoree. How to Make Friends With the Dark was an ILA Honor Book.She lives in Tucson, Arizona.