CANCELED: Namina Forna and friends — The Gilded Ones #2: The Merciless Ones 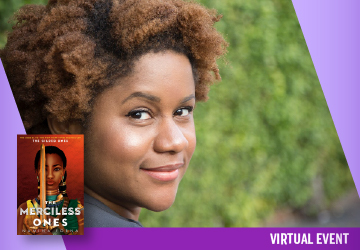 Update 6/24/22: Due to unforeseen circumstances (in this case, a broken laptop), we must cancel our 6/25 virtual event with Namina Forna. We hope to reschedule at a later date. Thank you!

Join a host of popular and NYT bestselling YA fantasy authors as they each defend a different badass heroine in an interactive virtual event where YOU get to vote on the winner. (What's the occasion? We're celebrating the release of The Gilded Ones #2: The Merciless Ones!)

The epic, hotly anticipated sequel to the instant New York Times bestseller The Gilded Ones about a girl with the power to remake her world—or destroy it.

“Fans of Children of Blood and Bone, Mulan, and the Dora Milaje from Black Panther are going to adore [The Gilded Ones].” —BuzzFeed

It's been six months since Deka freed the goddesses in the ancient kingdom of Otera and discovered who she really is... but war is waging across the kingdom, and the real battle has only just begun. For there is a dark force growing in Otera—a merciless power that Deka and her army must stop.

Yet hidden secrets threaten to destroy everything Deka has known. And with her own gifts changing, Deka must discover if she holds the key to saving Otera... or if she might be its greatest threat.

The Merciless Ones is the second thrilling installment of the epic fantasy series in which a young heroine fights against a world that would dare tame her.

"This action-packed sequel is even more thrilling than the first."
—BuzzFeed

"The second installment in Namina Forma’s West African-inspired fantasy series, this follow-up to The Gilded Ones doubles down on what made its predecessor so good: The rich, thoroughly lived-in world building full of details that are so unlike almost everything else in this genre space."
—Paste

"This book shimmers like gold. Add it to your library shelves to dazzle voracious readers."
—School Library Journal, starred review

Namina Forna is the author of the instant New York Times bestseller The Gilded Ones, the first book in an epic fantasy trilogy. She has an MFA in film and TV production from USC School of Cinematic Arts and a BA from Spelman College. Originally from Sierra Leone, West Africa, she moved to the US when she was nine and has been traveling back and forth ever since. She now works as a screenwriter in Los Angeles and loves building fantastical worlds and telling stories with fierce female leads. Visit her on twitter at @NaminaForna and on Instagram at @namina.forna.

Faridah Àbíké-Íyímídé is the instant New York Times and IndieBound bestselling author of Ace of Spades. She is an avid tea drinker, a collector of strange mugs and a recent graduate from a university in the Scottish Highlands where she studied English Literature. When she isn’t spinning dark tales, Faridah can be found examining the deeper meanings in Disney channel original movies.

Amélie Wen Zhao was born in Paris and grew up in Beijing in an international community. Her multicultural upbringing instilled in her a deep love of global affairs and cross-cultural perspectives. She seeks to bring this passion to her stories, crafting characters from kingdoms in different corners of the world. She attended college in New York City, where she now lives. Amélie is the author of the Blood Heir trilogy Blood Heir, Red Tigress, and Crimson Reign.

Marie Lu is the #1 New York Times bestselling author of the Legend trilogy and The Young Elites trilogy. She graduated from the University of Southern California and jumped into the video game industry, working for Disney Interactive Studios as a Flash artist. Now a full-time writer, she spends her spare time reading, drawing, playing Assassin’s Creed, and getting stuck in traffic. She lives in Los Angeles, California (see above: traffic), with one husband, one Chihuahua mix, and two Pembroke Welsh corgis.