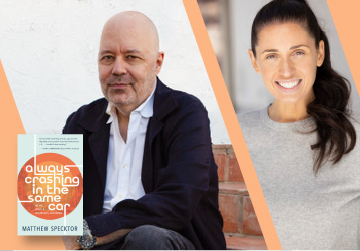 Third Place Books welcomes Matthew Specktor—novelist, essayist, and founding editor of the Los Angeles Review of Books—for a discussion of his new work blending memoir and cultural criticism, Always Crashing in the Same Car: On Art, Crisis, and Los Angeles, California. He will be joined in conversation by Lili Anolik, author of Hollywood's Eve: Eve Babitz and the Secret History of L.A.

About Always Crashing in the Same Car. . .

Blending memoir and cultural criticism, Matthew Specktor explores family legacy, the lives of artists, and a city that embodies both dreams and disillusionment.

In 2006, Matthew Specktor moved into a crumbling Los Angeles apartment opposite the one in which F. Scott Fitzgerald spent the last moments of his life. Fitz had been Specktor’s first literary idol, someone whose own passage through Hollywood had, allegedly, broken him. Freshly divorced, professionally flailing, and reeling from his mother’s cancer diagnosis, Specktor was feeling unmoored. But rather than giving in or “cracking up,” he embarked on an obsessive journey to make sense of the mythologies of “success” and “failure” that haunt the artist’s life and the American imagination.

Part memoir, part cultural history, part portrait of place, Always Crashing in the Same Car explores Hollywood through a certain kind of collapse. It’s a vibrant and intimate inspection of failure told through the lives of iconic, if under-sung, artists—Carole Eastman, Eleanor Perry, Warren Zevon, Tuesday Weld, and Hal Ashby, among others—and the author’s own family history. Through this constellation of Hollywood figures, he unearths a fascinating alternate history of the city that raised him and explores the ways in which curtailed ambition, insufficiency, and loss shape all our lives.

At once deeply personal and broadly erudite, it is a story of an art form (the movies), a city (Los Angeles), and one person’s attempt to create meaning out of both. Above all, Specktor creates a moving search for optimism alongside the inevitability of failure and reveals the still-resonant power of art to help us navigate the beautiful ruins that await us all.

Praise for Always Crashing in the Same Car. . .

'You may have no desire to know the intimate backroad histories of old LA, you might not be a film buff, but I'm telling you... you don't have to be much of anything to fall in love with this book. I couldn't stop until I found its author, the inimitable Matthew Specktor, in posession of success or happiness or peace or something that resembles those impossible objects. These aren't just essays about Fitzgerald, Warren Zevon, Thomas McGuane, Renata Adler; this is a book about what it is to be an artist in America. Specktor's story is both erudite and crafty magic."
—Spencer R., Author Events Manager at Third Place Books

"A haunting memoir-in-criticism exploring a very certain kind of failure—the Hollywood story. Specktor intricately knits his own losses and nostalgias into a larger cultural narrative of writers and filmmakers whose failures left behind a ghostly glamour. I can’t get it out of my mind."
—Janet Fitch, author of White Oleander

"In Hollywood, according to Brecht’s famous formulation, there was no need of heaven and hell; the presence of heaven alone served the unsuccessful as hell. But Los Angeles has always been full of commuters on the congested freeway between both camps. They are the subject of Matthew Specktor’s continuously absorbing and revealing book, itself nestling in the fruitful terrain between memoir and criticism."
—Geoff Dyer, author of Out of Sheer Rage

"Specktor has captured the LA I know, the one all around me and the one in my head, a city of invention and grit, surface and underbelly."
—Charles Yu, author of Interior Chinatown

Matthew Specktor is the author of the novels American Dream Machine and That Summertime Sound; a nonfiction book, The Sting; and the forthcoming memoir The Golden Hour (Ecco/HarperCollins). His writing has appeared in The New York Times, The Paris Review, The Believer, Tin House, Vogue, GQ, Black Clock, and Open City. He has been a MacDowell fellow, and is a founding editor of the Los Angeles Review of Books. He resides in Los Angeles.

Lili Anolik is a contributing editor at Vanity Fair. Her work has also appeared in Harper’s, Esquire, and The Believer. She is the author of Hollywood's Eve and lives in New York City with her husband and two sons.