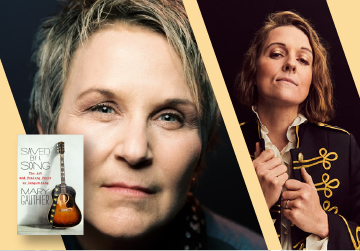 This is a virtual event taking place via Zoom Webinar. Purchase tickets via Eventbrite at the link below.

This is a ticketed virtual event. Tickets includes one copy of Mary Gauthier's new book, Saved by a Song, and a recording of the event exclusive to ticket buyers. Signed bookplates are also available in limited quantities. Books will be shipped after the event via USPS Media Mail.

This event is co-sponsored by the The Bushwick Book Club Seattle, an active community of musicians, songwriters, comedians, poets, artists, authors, and readers, all coming together to stage monthly performances of original works inspired by books. Bushwick also runs an education program called STYLE (Songwriting Through Youth Literature Education) that works in school and public libraries to inspire students through literature and songwriting. Learn more at thebushwickbookclubseattle.com.

From the Grammy-nominated folk singer and songwriter, an inspiring exploration of creativity and the redemptive power of song

Mary Gauthier was twelve years old when she was given her Aunt Jenny’s old guitar and taught herself to play with a Mel Bay basic guitar workbook. and music offered her a window to a world where others felt the way she did. Songs became lifelines to her, and she longed to write her own, one day.

Then, for a decade, while struggling with addiction, Gauthier put her dream away and her call to songwriting faded. It wasn’t until she got sober and went to an open mic with a friend did she realize that she not only still wanted to write songs, she needed to. Today, Gauthier is a decorated musical artist, with numerous awards and recognition for her songwriting, including a Grammy nomination.

In Saved by a Song, Mary Gauthier pulls the curtain back on the artistry of songwriting. Part memoir, part philosophy of art, part nuts and bolts of songwriting, her book celebrates the redemptive power of song to inspire and bring seemingly different kinds of people together.

"Beautiful... song and verse from a high place.”
—Robert Plant

“I remember exactly where I was the first time I heard a Mary Gauthier tune. That’s the kind
of songwriter she is.“
—Sarah Silverman

"Gauthier has come through her own long dark night of the soul knowing... we could all use a whole lot more of Mary."
—Emmylou Harris, Country music Hall of Fame inductee

"Generous and big-hearted, Gauthier has stories to tell and worthwhile advice to share."
—Wally Lamb, author of I Know This Much Is True

The Associated Press named Mary Gauthier one of the best songwriters of her generation. Her album Rifles & Rosary Beads was nominated for a Grammy award for Best Folk Album and Record of the Year by the Americana Music Association. Her songs have been recorded by dozens of artists, including Boy George, Blake Shelton, Tim McGraw, Bettye Lavette, Kathy Mattea, Amy Helm and Candi Staton. Saved by a Song is her first book. She lives in Nashville. For more information, please visit: https://www.marygauthier.com/

Brandi Carlile is a five-time Grammy Award-winning singer, songwriter, performer, and producer. Beloved by fans and critics alike, Carlile and her band have performed sold-out concerts across the world. Since her 2004 debut, she has released six studio albums and was the most nominated female artist at the 2019 Grammy Awards, with six nominations, including Album, Record, and Song of the Year. Carlile’s Looking Out Foundation amplifies the impact of music by empowering those without a voice, having raised over $2 million for grassroots causes. Brandi Carlile lives in Maple Valley, Washington, with her wife, Catherine, and their two daughters.

This is a virtual event held via Zoom Webinar. Books will be shipped after the event via USPS Media Mail. Please note that Third Place Books does NOT offer international shipping.