Virtual Event: Marty Wingate and Ellie Alexander — The Librarian Always Rings Twice & The Cure for What Ales You 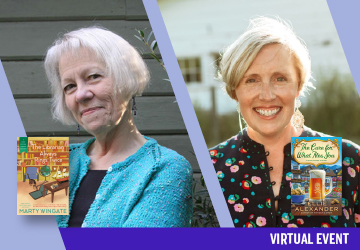 Third Place Books is pleased to welcome Pacific Northwest novelists Marty Wingate and Ellie Alexander for a joint reading of their cozy new murder mysteries, The Librarian Always Rings Twice and The Cure for What Ales You: A Sloan Krause Mystery.

About The Librarian Always Rings Twice. . .

When a mysterious stranger turns up making claims that threaten Lady Fowling’s legacy, Hayley Burke must dig deep into her late-benefactor’s history to uncover the truth and catch a conniving killer in this new mystery from USA Today bestselling author Marty Wingate.

It has been nearly a year since I took up my position as curator of Lady Georgiana Fowling’s collection of Golden Age of Mystery writers’ first editions at her library in Middlebank House. I have learned that I need to take the good with the bad. The good: I have finally convinced Mrs. Woolgar to open up the collection to the public one day a week so that they too can share in Lady Fowling’s passion. The bad: although he would not be my first, or even tenth, choice, at the insistence of the board Charles Henry Dill, Lady Fowling’s unscrupulous nephew, is now my personal assistant.

On one of our first days open to the public, Mr. John Aubrey shows up at Middlebank House and insists that Lady Georgiana Fowling is his grandmother. Mrs. Woolgar is scandalized by his claims, and Charles Henry, who feels he has been cheated out of his rightful inheritance as Lady Fowling’s heir, is furious. I do not know that I believe Mr. Aubrey, yet he has knowledge of Lady Fowling’s life and writings that few possess. To further complicate matters, an associate of Mr. Aubrey’s intends to help us uncover the truth of John’s story. But before he can do that, he is murdered and the police have reason to suspect Charles Henry.

As much as I would like to lock up Charles Henry and throw away the key, I cannot believe he is a killer. And I also know there is something dead wrong about Mr. Aubrey’s tales regarding his “grandmother” Lady Fowling. I will need to make sense of her past in order to suss out the true villain of this story.

About The Cure for What Ales You: A Sloan Krause Mystery. . .

Amateur sleuth and brewer Sloan Krause contends with her past—and a murder related to it—in The Cure for What Ales You, another delightful mystery from cozy writer Ellie Alexander.

After a long cold winter, spring is beginning to bloom in the alpine village of Leavenworth, Washington, where craft brewer Sloan Krause and her partner in crime Garrett Strong are putting the finishing touches on their bright and refreshing Lemon Kiss ale. They’ll be debuting their new line at the Maifest celebration, which will bring visitors from near and far to dance around the Maipole and shop at the outdoor flower markets.

Despite the festive spirit in the air, Sloan is brewing over her past. She’s spent months following leads that have turned into dead ends. But when she spots a woman who strongly resembles Marianne—a long lost contact who may be her only connection to piecing together her story—she hopes that things might be taking a turn in her favor. That hope is quickly smashed when Marianne is involved in the murder of a local housekeeper. To make matters worse, Marianne issues a dire warning that Sloan and her entire family are in danger. If Sloan can’t figure out who the killer is and what happened in her past, she won’t find any hoppy endings.

A Seattle native, Marty Wingate is a member of the Royal Horticultural Society and leads garden tours through England, Scotland, and Ireland when she is not killing people in fiction.

Ellie Alexander is a Pacific Northwest native who spends ample time testing pastry recipes in her home kitchen or at one of the many famed coffeehouses nearby. When she’s not coated in flour, you’ll find her outside exploring hiking trails and trying to burn off calories consumed in the name of “research.” She is also the author of the Bakeshop Mysteries, which began with Meet Your Baker.