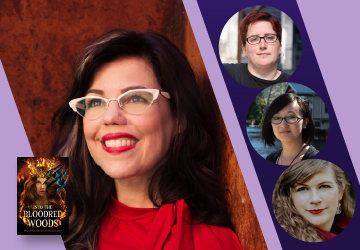 It's a Fairy Tale Extravaganza! Third Place Books is pleased to welcome Martha Brockenbrough to celebrate the release of her new YA novel, Into the Bloodred Woods. Martha will be joined in conversation by a cabal of Pacific Northwest YA writers—Lish McBride, Margaret Owen, and Kendare Blake!

About Into the Bloodred Woods. . .

Happily ever after is a lie.

Once upon a time there was a kingdom, and a forest that liked to eat men, and a girl who would change everything, but not alone ...

There's no such thing as once upon a time.

In a faraway land, populated by were beasts and surrounded by a powerful forest, lies a kingdom about to be sent into chaos. On his deathbed, King Tyran divides his land, leaving half to each of his two children -- so they'll rule together. However, his son, Albrecht, is not satisfied with half a kingdom. And even though his sister, Ursula, is the first born, he decides that, as a girl and were bear, she is unfit to rule. So he invades her land, slaughtering her people and most of the were beasts, and claims it for himself.

As King Albrecht builds his iron rule and an army to defend his reign, Ursula is gathering the survivors and making plans to seize back the kingdom. Not just her half -- the whole thing. Because Albrecht should have never been allowed to sit on the throne, and Ursula is going to take his crown. And if he's not careful, he might not get to keep his head either.

Martha Brockenbrough (rhymes with broken toe) is the author of two books for adults and numerous books for young readers (with several others on the way), including YA fiction and nonfiction, picture books, and a forthcoming chapter book series. A faculty member at Vermont College of Fine Arts, she's also the founder of National Grammar Day (every March 4), and she's written game questions for Cranium and Trivial Pursuit. The former editor of MSN.com, Martha has interviewed lots of celebrities, including the Jonas Brothers and Slash. Her work has been published in a variety of places, including The New York Times. She also wrote an educational humor column for the online encyclopedia Encarta for nine years. She lives in Seattle with her family. Her favorite kind of food is Indian, although Thai runs a close second. Besides writing, she likes board games, playing music with the family band, travel to places far and near, drinking lots of coffee, and working out really hard at the gym. (Photo credit: Emerald England)

Lish McBride is the author of funny and creepy Young Adult books such as Hold Me Closer, Necromancer; Necromancing the Stone; Firebug; Pyromantic and Curses. She has published short stories in the Normal School, Tor.com, and the anthologies Cornered, What to Read in the Rain, Freaks & Other Family, and Kisses & Curses. She got her BFA in creative writing from Seattle University and her MFA from University of New Orleans. Her first book, Hold Me Closer, Necromancer, was an ALA Best Book for Young Adults title, Morris Award finalist, and won the Scandiuzzi Children’s Book Award. While she has no long term goals for world domination, she would like her own castle.

Margaret Owen was born and raised at the end of the Oregon Trail and has worked in everything from thrift stores to presidential campaigns. The common thread between every job can be summed up as: lessons were learned. She now spends her days writing and negotiating a long-term hostage situation with her two monstrous cats. She is the author of the Merciful Crow series. In her free time, she enjoys exploring ill-advised travel destinations and raising money for social justice nonprofits through her illustrations. She resides in Seattle, Washington.

Kendare Blake is the #1 New York Times bestselling author of the Three Dark Crowns series. She holds an MA in creative writing from Middlesex University in northern London and is also the author of Anna Dressed in Blood, a Cybils Awards finalist; Girl of Nightmares; Antigoddess; Mortal Gods; and Ungodly. Her books have been translated into over twenty languages, have been featured on multiple best-of-year lists, and have received many regional and librarian awards. Kendare lives and writes in Gig Harbor, WA, from beneath a pile of dogs and cats. Visit her online at www.kendareblake.com. (Photo credit: Shawn H. Nichols Photography)