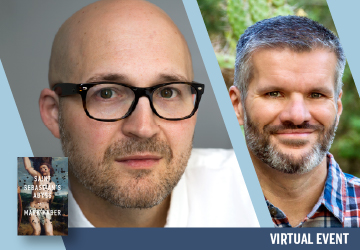 A sleek novel about Renaissance art, rivalry between friends, and the ‘perilous promise of a dead canvas'

Third Place Books is honored to host bookseller and critically-acclaimed author Mark Haber for a discussion of his new novel, Saint Sebastian's Abyss. He will be joined in conversation by Matt Bell, the author of Appleseed and, most recently, the craft book Refuse to Be Done.

“What I wanted more than anything was to be standing beside Schmidt, in concert with Schmidt, at the foot of Saint Sebastian’s Abyss along with Schmidt, hands cupped to the sides of our faces, debating art, transcendence, and the glory of the apocalypse.”

Former best friends who built their careers writing about a single work of art meet after a decades-long falling-out. One of them, called to the other’s deathbed for unknown reasons by a “relatively short” nine-page email, spends his flight to Berlin reflecting on Dutch Renaissance painter Count Hugo Beckenbauer and his masterpiece, Saint Sebastian’s Abyss, the work that established both men as important art critics and also destroyed their relationship. A darkly comic meditation on art, obsession, and the enigmatic power of friendship, Saint Sebastian’s Abyss stalks the museum halls of Europe, feverishly seeking salvation, annihilation, and the meaning of belief.

“[Saint Sebastian’s Abyss] poses huge questions that tax the heart as much as the brain. . . . Haber’s slim volume quietly contemplates a possible distinction of art and not-art, as well as the nature of authority and of elitism. Taut as a drum, it also calls to mind the early novellas of Roberto Bolaño and reads, at times, like an outtake from William Gaddis’s The Recognitions.”
—Andrew Ervin, The Brooklyn Rail

“[A] careful, fuguelike intellectual satire. . . . Haber deliberately withholds details about the painting itself—we know there’s a donkey, a cliffside, rays of light, and apostles, but not enough to sense why [his characters] are so thunderstruck. And in a way, they hardly seem to know themselves. . . . A darkly funny novel about the wages of small-stakes intellectual combat.”
—Kirkus Reviews

“In Saint Sebastian’s Abyss, we are swept away by the hilarious and misguided preoccupations of two compulsive pedants, a comedy duo, whose misadventures are as irresistible as they are outrageous.”
—Rikki Ducornet

“Something about the deadpan confidence of Haber’s work has the power to convince me that imaginary paintings are real, conjured writers have walked the Earth, and the sky is purple and filled with green clouds. We’re all gullible neophytes before Mark Haber’s breathless novels. Saint Sebastian’s Abyss is one of the first of its kind by an American writer, a sleek novel about Renaissance art, rivalry between friends and devotees, the ‘perilous promise of a dead canvas,’ and the meaning of the obsessions that orbit our careers. . . There’s not a single sentence in this book that isn’t ecstatic. To read it once is staggering; to read it again is necessary.”
—Spencer Ruchti,  Author Events Manager at Third Place Books

Mark Haber is the author of the 2008 story collection Deathbed Conversions and the novel Reinhardt’s Garden, longlisted for the 2020 PEN/Hemingway Award. He is the operations manager at Brazos Bookstore in Houston, Texas. His nonfiction has appeared in the Rumpus, Music & Literature, and LitHub. His fiction has appeared in Southwest Review and Air/Light. (Photo credit: Nina Subin)

Matt Bell is the author most recently of the novels Appleseed (a New York Times Notable Book of 2021), Scrapper (a Michigan Notable Book), and In the House upon the Dirt Between the Lake and the Woods (a finalist for the Young Lions Fiction Award). His stories have appeared in Best American Mystery Stories, Esquire, Tin House, Conjunctions, Fairy Tale Review, Gulf Coast, and many other publications. A native of Michigan, he now teaches creative writing at Arizona State University. (Photo credit: Jessica Bell)