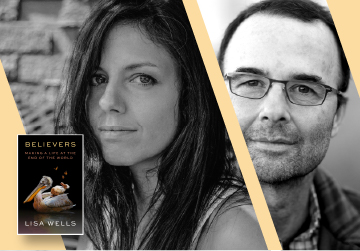 Third Place Books welcomes Lisa Wells—author of The Fix and editor at The Volta—for the launch of her fascinating new book, Believers: Making a Life at the End of the World. She will be joined in conversation by the acclaimed essayist Charles D'Ambrosio, the award-winning author of Loitering: New and Collected Essays.

In search of answers and action, the award-winning poet and essayist Lisa Wells brings us Believers, introducing trailblazers and outliers from across the globe who have found radically new ways to live and reconnect to the Earth in the face of climate change.

We find ourselves at the end of the world; how then shall we live?

Like many of us, Lisa Wells has spent years overwhelmed by news of apocalyptic-scale climate change and a coming sixth extinction. She did not need to be convinced of the stakes. But what can be done? Wells embarked on a pilgrimage, seeking answers in dedicated communities—outcasts and visionaries—on the margins of society.

Wells meets Finisia Medrano, an itinerant planter and misanthrope leading a group of nomadic activists to rewild the American desert. She finds a group of environmentalist Christians practicing "watershed discipleship" in New Mexico; another group in Philadelphia turning the tools of violence into tools of farming—guns into plowshares. She watches the world’s greatest tracker teach how to read a trail, and visits botanists who are restoring land overrun by invasive species and destructive humans. She talks with survivors of catastrophic wildfires in California as they try to rebuild in new ways that acknowledge the fires will come again.

Blending reportage, memoir, history, and philosophy, Wells opens up seemingly intractable questions about the damage we have done and how we might reckon with our inheritance. “Brilliant in its quest . . . [and] an essential document of our time” (Charles D’Ambrosio), Believers demands transformation: If the Earth is our home, if our home is being destroyed—how then shall we live?

“Wells takes readers on a tour of individuals focused on connecting with—and restoring—nature . . . In shocking and vivid detail . . . her descriptions of climate change capture the harsh reality of devastation . . . Climate-minded readers should take note of this roving account of perseverance.”
—Publishers Weekly

“We are living in an extreme moment, and one where it’s very hard to know what effective action looks like against crises of a scale we’ve not before encountered. These accounts of people trying to grapple with that reality are sometimes inspiring and often cautionary, and always a spur to thinking about how the rest of us might accomplish the most we can.”
—Bill McKibben, author of Falter: Has the Human Game Begun to Play Itself Out?

“Lisa Wells’s writing is brilliant; her conclusions are profound. If you can take only one book with you while wading through the wreckage of the Anthropocene, this is the one.”
—Kate Lebo, author of The Book of Difficult Fruit

Lisa Wells is a poet and nonfiction writer from Portland, Oregon. Her debut collection of poetry, The Fix, won the Iowa Poetry Prize. Her poems and essays have been published by The New York Times, Harper’s Magazine, Granta, The Believer, n+1, The Iowa Review, The Poetry Foundation, and others. She lives in Seattle and is an editor for The Volta and Letter Machine Editions.

Charles D'Ambrosio is the author of two books of fiction, The Point and Other Stories and The Dead Fish Museum, and two collections of essays, Orphans, and Loitering: New & Collected Essays. Many of his stories originally appeared in The New Yorker, and he has also published fiction in The Paris Review, Zoetrope All-Story, and A Public Space. His work has been widely anthologized and selected for the Pushcart Prize, Best American Short Stories, and the O. Henry Award. Among other honors, he has been the recipient of a Lannan Literary Fellowship, a Whiting Writer's Award and an Academy Award in Literature from the American Academy of Arts and Letters. He teaches fiction at the Iowa Writers’ Workshop.