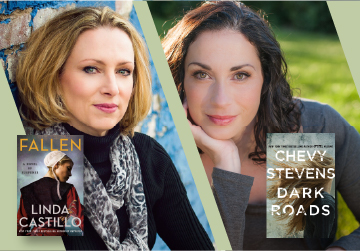 About Fallen: A Novel of Suspense. . .

In New York Times bestselling author Linda Castillo's new thriller Fallen, a rebellious Amish woman leaves the Plain life, but the secrets she takes with her will lead Chief of Police Kate Burkholder down a dark path to danger and death.

When a young woman is found murdered in a Painters Mill motel, Chief of Police Kate Burkholder is shocked to discover she once knew the victim. Rachael Schwartz was a charming but troubled Amish girl who left the fold years ago and fled Painters Mill. Why was she back in town? And who would kill her so brutally?

Kate remembers Rachael as the only girl who was as bad at being Amish as Kate was--and those parallels dog her. But the more Kate learns about Rachael's life, the more she's convinced that her dubious reputation was deserved. As a child, Rachael was a rowdy rulebreaker whose decision to leave devastated her parents and best friend. As an adult, she was charismatic and beautiful, a rabble-rouser with a keen eye for opportunity no matter who got in her way. Her no-holds-barred lifestyle earned her a lot of love and enemies aplenty--both English and Amish.

As the case heats to a fever pitch and long-buried secrets resurface, a killer haunts Painters Mill. Someone doesn't want Rachael's past—or the mysteries she took with her to the grave—coming to light. As Kate digs deeper, violence strikes again, this time hitting close to home. Will Kate uncover the truth and bring a murderer to justice? Or will a killer bent on protecting a terrible past stop her once and for all—and let the fallen be forgotten?

The acclaimed and beloved author of Still Missing is back with her most breathtaking thriller yet.

For decades, people have been warned about the Cold Creek Highway. Hitchhikers have vanished along it over the years, and women have been known to have their cars break down... and never be seen again. When Hailey McBride decides to run away from an unbearable living situation, she thinks that her outdoor skills will help her disappear into the Cold Creek wilderness, and she counts on people thinking that she was the victim of the killer.

One year later, Beth Chevalier arrives in Cold Creek to attend a memorial for the victims of the highway, but it might as well be one week for the amount of pain that Beth is still dealing with after her sister, Amber, was murdered the previous summer. Beth has quit university, is lying to her parents, and popping pills like Tic Tacs. Maybe this will finally bring her peace.

When she gets a job at a local diner where Amber once worked, she connects with people who knew her sister. Beth wants to find who killed her sister and put her own life back together, but as she gets closer to the truth, she learns that there is more than one person lying in Cold Creek.

“Excellent. . . briskly paced. . . The intelligent, insightful Kate continues to be an appealing character, and Castillo delivers new sides to her persona with each outing.”
—South Florida Sun-Sentinel

“Riveting. . . Castillo’s sensitive handling of her subject matter builds a nuanced, often troubling picture of insular, patriarchal communities in which silence allows predators to thrive. Details of Amish crafts, family life, and commerce contrast with the ugliness of the crimes. . . armchair travelers should find this a satisfying outing.”
―Publishers Weekly

“My favorite Chevy Stevens book since Still Missing. Stevens reliably creates complex, resilient female characters, and Hailey and Beth—whose lives collide in Dark Roads—are utterly compelling. The suspense builds with every page, and the ending is a complete shocker.”
—Sarah Pekkanen, author of The Wife Between Us

“Chevy Stevens is a brilliant and unique talent and Dark Roads is an instant classic. My hat’s off to her.”
—CJ Box, author of Long Range

“Chevy Stevens is back and better than ever with a grisly tale that will make you think twice before driving down any deserted highways at night. Dark Roads is a chilling, pulse-pounding thriller that also tugs at the heartstrings. It’s everything you’ve come to love from a master of the psych thriller genre!”
—Mary Kubica, author of The Other Mrs.

Linda Castillo is the New York Times bestselling author of the Kate Burkholder novels, including Sworn to Silence and Her Last Breath, crime thrillers set in Amish country. The first book in the series, Sworn to Silence, was adapted into a Lifetime Original Movie titled An Amish Murder starring Neve Campbell as Kate Burkholder. Castillo is the recipient of numerous industry awards including the Daphne du Maurier Award of Excellence, the Holt Medallion and a nomination for the RITA.

Chevy Stevens lives on Vancouver Island with her husband and daughter. When she isn’t working on her next book, she’s hiking with her two dogs on her favorite mountain trails and spending time with her family. Chevy’s current obsessions are vintage Airstreams, Hollywood memoirs, all things mid-century modern, and stand-up comedians—not necessarily in that order. Her books, including Still Missing, a New York Times bestseller and winner of the International Thriller Writers Award for Best First Novel, have been published in more than 30 countries.