Celebrate the 40th Anniversary of This Bridge Called My Back: Writings by Radical Women of Color 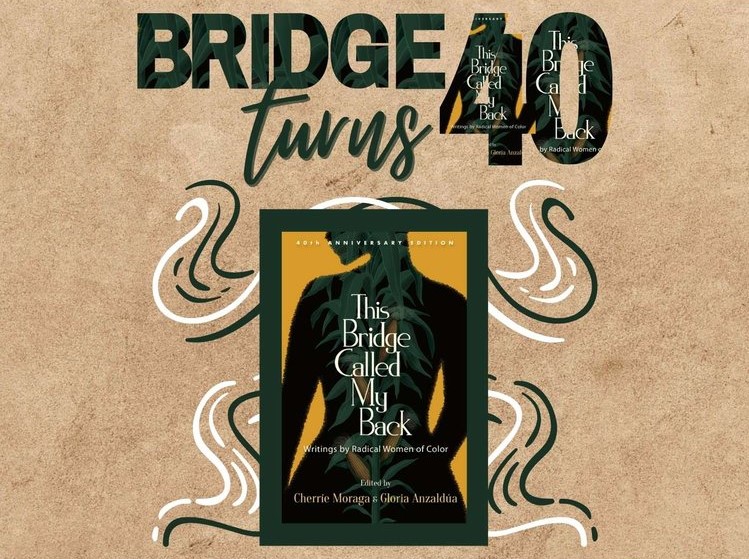 Celebrate the 40th Anniversary Edition of This Bridge Called My Back with this special virtual event!

Come celebrate with Las Maestras, Bridge contributors, and virtual participants near and far!

All are welcome to this inter-generational homage to sister-mother-grandmother-ancestor writers, artists and activists.

About This Bridge Called My Back. . .

Fortieth anniversary edition of the foundational text of women of color feminism.

Originally released in 1981, This Bridge Called My Back is a testimony to women of color feminism as it emerged in the last quarter of the twentieth century. Through personal essays, criticism, interviews, testimonials, poetry, and visual art, the collection explores, as coeditor Cherríe Moraga writes, "the complex confluence of identities—race, class, gender, and sexuality—systemic to women of color oppression and liberation."

Reissued here, forty years after its inception, this anniversary edition contains a new preface by Moraga reflecting on Bridge's "living legacy" and the broader community of women of color activists, writers, and artists whose enduring contributions resonate with its radical vision. Further features help set the volume's historical context, including an extended introduction by Moraga from the 2015 edition, a statement written by Gloria Anzaldúa in 1983, and visual art produced during the same period by Betye Saar, Ana Mendieta, Yolanda M. López, and others, curated by their contemporary, visual artist, Celia Herrera Rodríguez. Bridge continues to reflect an evolving definition of feminism, one that can effectively adapt to and help inform an understanding of the changing economic and social conditions of women of color in the United States and throughout the world.

Praise for This Bridge Called My Back. . .

“Immense is my admiration for the ongoing dialogue and discourse on feminism, Indigenous feminism, the defining discussions in women of color movements and the broader movement. I have loved this book for thirty years, and am so pleased we have returned with our stories, words, and attributes to the growing and resilient movement.” — Winona LaDuke (Anishinaabe), Executive Director, Honor the Earth

“This Bridge Called My Back … dispels all doubt about the power of a single text to radically transform the terrain of our theory and practice. Twenty years after its publication, we can now see how it helped to untether the production of knowledge from its disciplinary anchors—and not only in the field of women’s studies. This Bridge has allowed us to define the promise of research on race, gender, class and sexuality as profoundly linked to collaboration and coalition-building. And perhaps most important, it has offered us strategies for transformative political practice that are as valid today as they were two decades ago.” — Angela Davis, University of California, Santa Cruz