Virtual Event: Kim Fu and Danya Kukafka — Lesser Known Monsters of the 21st Century & Notes on an Execution: A Novel 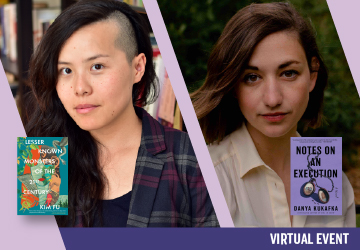 Third Place Books is thrilled to welcome two local authors close to the Third Place Books family: Kim Fu and Danya Kukafka, who will be celebrating the release of their new books, Lesser Known Monsters of the 21st Century and Notes on an Execution.

Click the link below to view the livestream at the time of the event! During the event, you can ask questions using the Q&A feature, or chat with fellow attendees. A recording of the event will be made available on our YouTube channel soon after the event.

About Lesser Known Monsters of the 21st Century. . .

In the twelve unforgettable tales of Lesser Known Monsters of the 21st Century, the strange is made familiar and the familiar strange, such that a girl growing wings on her legs feels like an ordinary rite of passage, while a bug-infested house becomes an impossible, Kafkaesque nightmare. Each story builds a new world all its own: a group of children steal a haunted doll; a runaway bride encounters a sea monster; a vendor sells toy boxes that seemingly control the passage of time; an insomniac is seduced by the Sandman. These visions of modern life wrestle with themes of death and technological consequence, guilt and sexuality, and unmask the contradictions that exist within all of us.

Mesmerizing, electric, and wholly original, Kim Fu’s Lesser Known Monsters of the 21st Century blurs the boundaries of the real and fantastic, offering intricate and surprising insights into human nature.

"Stellar. . . . Fu’s stories crackle with quirky plots, and her characters’ problems and hunger for new possibilities are palpable. This is a winner."
—Publishers Weekly, Starred Review

"Lesser Known Monsters of the 21st Century is for the adventurous reader—someone willing to walk into a story primed for cultural critique and suddenly come across a plot for murder, or to consider the dangers of sea monsters alongside those posed by 21st century ennui. Each story is spectacularly smart, hybrid in genre, and bold with intention. The monsters here are not only fantastical figures brought to life in hyper-reality but also the strangest parts of the human heart. This book is as moving as it is monumental."
—Lucy Tan, author of What We Were Promised

About Notes on an Execution: A Novel. . .

In the tradition of Long Bright River and The Mars Room, a gripping and atmospheric work of literary suspense that deconstructs the story of a serial killer on death row, told primarily through the eyes of the women in his life—from the bestselling author of Girl in Snow.

Ansel Packer is scheduled to die in twelve hours. He knows what he’s done, and now awaits execution, the same chilling fate he forced on those girls, years ago. But Ansel doesn’t want to die; he wants to be celebrated, understood. He hoped it wouldn’t end like this, not for him.

Through a kaleidoscope of women—a mother, a sister, a homicide detective—we learn the story of Ansel’s life. We meet his mother, Lavender, a seventeen-year-old girl pushed to desperation. We meet Hazel, twin sister to Ansel’s wife, inseparable since birth, forced to watch helplessly as her sister’s relationship threatens to devour them all. And finally, Saffy, the homicide detective hot on his trail, who has devoted herself to bringing bad men to justice but struggles to see her own life clearly. As the clock ticks down, these three women sift through the choices that culminate in tragedy, exploring the rippling fissures that such destruction inevitably leaves in its wake.

Blending breathtaking suspense with astonishing empathy, Notes on an Execution presents a chilling portrait of womanhood as it simultaneously unravels the familiar narrative of the American serial killer, interrogating our system of justice and our cultural obsession with crime stories, asking readers to consider the false promise of looking for meaning in the psyches of violent men.

"A searing portrait of the complicated women caught in the orbit of a serial killer. Notes on an Execution examines a culture that romanticizes men who kill while also exploring the lives of the overlooked women altered by this violence. Compassionate and thought-provoking."
—Brit Bennett, author of The Vanishing Half

"Provocative, intelligent, thrilling, moving."
—Paula Hawkins, author of The Girl on the Train

Kim Fu, author of Lesser Known Monsters of the 21st Century, has also written For Today I Am a Boy, winner of the Edmund White Award for Debut Fiction, finalist for the PEN/Hemingway Award, and a New York Times Book Review Editor’s Choice. Her second novel, The Lost Girls of Camp Forevermore, was a finalist for the Washington State Book Award. Fu’s writing has appeared in Granta, The Atlantic, The New York Times, Hazlitt, and the TLS. She lives in Seattle, Washington.

Danya Kukafka, author of Notes on an Execution, is the internationally bestselling author of Girl in Snow. She is a graduate of New York University's Gallatin School of Individualized Study. She works as a literary agent.