Virtual Event: Kendare Blake with Martha Brockenbrough — All These Bodies 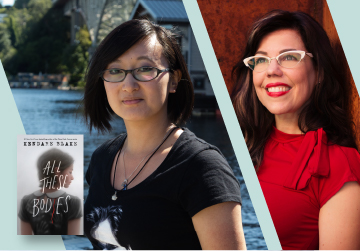 Third Place Books is thrilled to welcome the New York Times bestselling author of the Three Dark Crowns series, Kendare Blake, for the release of her new novel, All These Bodies. She will be joined in conversation by Martha Brockenbrough, author of Alexander Hamilton, Revolutionary and the forthcoming book Into the Bloodred Woods.

Signed bookplates are available with ever purchase of All These Bodies!

About All These Bodies. . .

Sixteen bloodless bodies. Two teenagers. One impossible explanation. In this edge-of-your-seat mystery from #1 New York Times bestselling author Kendare Blake, the truth is as hard to believe as it is to find.

Summer 1958. A gruesome killer plagues the Midwest, leaving behind a trail of bodies completely drained of blood.

Michael Jensen, an aspiring journalist whose father happens to be the town sheriff, never imagined that the Bloodless Murders would come to his backyard. Not until the night the Carlson family was found murdered in their home. Marie Catherine Hale, a diminutive fifteen-year-old, was discovered at the scene—covered in blood. She is the sole suspect in custody. Michael didn’t think that he would be part of the investigation, but he is pulled in when Marie decides that he is the only one she will confess to. As Marie recounts her version of the story, it falls to Michael to find the truth: What really happened the night that the Carlsons were killed? And how did one girl wind up in the middle of all these bodies?

Praise for All These Bodies. . .

“Reads like true crime. A chilling descent into the human psyche.”
—Booklist

Kendare Blake is the #1 New York Times bestselling author of the Three Dark Crowns series. She holds an MA in creative writing from Middlesex University in northern London and is also the author of Anna Dressed in Blood, a Cybils Awards finalist; Girl of Nightmares; Antigoddess; Mortal Gods; and Ungodly. Her books have been translated into over twenty languages, have been featured on multiple best-of-year lists, and have received many regional and librarian awards. Kendare lives and writes in Gig Harbor, WA, from beneath a pile of dogs and cats. Visit her online at www.kendareblake.com.

Martha Brockenbrough (rhymes with broken toe) is the author of two books for adults and numerous books for young readers (with several others on the way), including YA fiction and nonfiction, picture books, and a forthcoming chapter book series. A faculty member at Vermont College of Fine Arts, she's also the founder of National Grammar Day (every March 4), and she's written game questions for Cranium and Trivial Pursuit. The former editor of MSN.com, Martha has interviewed lots of celebrities, including the Jonas Brothers and Slash. Her work has been published in a variety of places, including The New York Times. She also wrote an educational humor column for the online encyclopedia Encarta for nine years. She lives in Seattle with her family. Her favorite kind of food is Indian, although Thai runs a close second. Besides writing, she likes board games, playing music with the family band, travel to places far and near, drinking lots of coffee, and working out really hard at the gym.