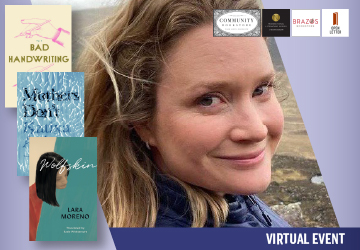 This event will be broadcast live on Third Place Books' Zoom Webinar platform. Registering will provide you with a unique access link in an email. During the event, you can ask questions using the Q&A feature, or chat with fellow attendees. A recording of the event will be made available and emailed to all who register.

This author talk is free! You can sustain our author series by purchasing a copy of the featured books.

"That violence and abuse can happen, be evident, and yet be ignored is Moreno’s searing observation." —Declan O’Driscoll, The Irish Times

Hidden family secrets come to light in this poetic novel of motherhood, sisterhood, and ambivalence

Sofía is thirty-five and her husband has left her. Her father died the year before, and her mother is living in the Canary Islands with a new partner. Sofía flees the city with her young son, seeking refuge in her father’s house on the southern coast of Spain, where she spent summers as a girl. Her younger sister, with whom she has a close but uneasy relationship, joins her. Living together again, the sisters face their present as well as their childhood and tangled past.

Wolfskin is an intimate meditation on ambivalence and motherhood, eroticism and disappointment, family violence and failure, and ultimately, the possibility—or impossibility—of living with those you love.

"Inventive in form and fearless in style, this novel makes plain how insufficient a courtroom is to hold the complexity of psychology. Agirre has given us a deeply unsettling exploration of what a mother or a woman can or cannot, should or should not do — a topic both timeless and all too timely."
—Catherine Lacey, The New York Times

A mother kills her twins. Another woman, the narrator of this story, is about to give birth. She is a writer, and she realizes that she knows the woman who committed the infanticide. An obsession is born. She takes an extended leave, not for child-rearing, but to write. To research and write about the hidden truth behind the crime.

Mothers don’t write. Mothers give life. How could a woman be capable of neglecting her children? How could she kill them? Is motherhood a prison? Complete with elements of a traditional thriller, this a groundbreaking novel in which the chronicle and the essay converge. Katixa Agirre reflects on the relationship between motherhood and creativity, in dialogue with writers such as Sylvia Plath and Doris Lessing. Mothers Don’t plumbs the depths of childhood and the lack of protection children face before the law. The result is a disturbing, original novel in which the author does not offer answers, but plants contradictions and discoveries.

From the author of the highly acclaimed Four by Four and Among the Hedges comes a collection of unsettling, captivating stories.

The eleven stories in this collection approach themes of childhood and adolescence, guilt and redemption, power and freedom. There are children who resist authority and experience the process of growing up with shock, and loneliness; alienated young girls whose rebellion lies under the surface—subterranean, furious and impotent; people who are tormented—or not—by regret and doubt, addicted to feelings of culpability; men who take advantage of women and adults who exercise power over children with a disturbing degree of control; kids abandoned by their parents; the suicide of the elderly and the young; lives that hide crimes—both real and imagined. Eschewing cosmopolitanism in favor of the micro-world of her characters, Mesa depicts a reality that is messy and disturbing, on even the smallest scale of an individual life, a single family.

Lynn Steger Strong is the author of the novels Hold Still, Want, and Flight. Her non-fiction has appeared in The New York Times, Los Angeles Times, New York, The Paris Review, Time, and elsewhere. She has taught writing at The Pratt Institute, Fairfield University, Catapult, and Columbia University and will be the Visiting Fiction Writer at Bates College for the 2022-2023 school year. She was born and raised in South Florida.

Mark Haber is the author of the 2008 story collection Deathbed Conversions and the novel Reinhardt’s Garden, longlisted for the 2020 PEN/Hemingway Award. His second novel, Saint Sebastian's Abyss, was published in 2022. He is the operations manager at Brazos Bookstore in Houston, Texas. His nonfiction has appeared in the Rumpus, Music & Literature, and LitHub. His fiction has appeared in Southwest Review and Air/Light.

Azareen Van Der Vliet Oloomi is the author of the novels Savage Tongues (Mariner, 2021) and Call Me Zebra (Mariner, 2018) which won the PEN/Faulkner Award for Fiction, the John Gardner Award, was long listed for the PEN Open Book Award, was an Amazon Best Book of the Year, A Publisher’s Weekly Bestseller and named a Best Book by over twenty publications. It has been translated into Italian, Japanese, Chinese, Turkish and Romanian and was published in the UK by Alma Books, a division of Bloomsbury. She received a 2015 Whiting Writers' Award and was a National Book Foundation "5 Under 35" honoree for her debut novel, Fra Keeler (Dorothy, a publishing project, 2012). Her work has been supported by a Fulbright Fellowship, a MacDowell Fellowship and a Fellowship from Art OMI and has appeared in The Paris Review, GRANTA, Guernica, BOMB,  and the Los Angeles Review of Books among other places.  She is Iranian-American and has lived in Catalonia, Italy, Iran and the United Arab Emirates.

More about the authors. . .

Lara Moreno was born in 1978 in Seville and lives in Madrid, where she works as an editor and teaches writing. She has published the collections of short fiction Casi todas las tijeras and Cuatro Veces Fuego, as well as several books of poetry, which have been collected, along with new and unpublished poems, in the recently published Tempestad en víspera de viernes. She was awarded the FNAC New Talent Award upon the publication of her first novel, Por si se va la luz (In Case We Lose Power), which was followed in 2016 by Wolfskin.

Sara Mesa is the author of eight works of fiction, including Scar (winner of the Ojo Critico Prize), Four by Four (a finalist for the Herralde Prize), An Invisible Fire (winner of the Premio Málaga de Novela), Among the Hedges, and Un amor, which was named by several Spanish newspapers as the book of the year for 2020. Her works have been translated into more than ten different languages, and she has been widely praised for her concise, sharp writing style.