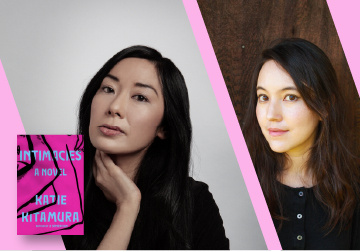 Third Place Books is thrilled to welcome Katie Kitamura—author of the critically-acclaimed novel A Separation—for a discussion of her latest book, Intimacies. She will be joined in conversation by Alexandra Kleeman, the author of You Too Can Have a Body Like Mine and, most recently, the novel Something New Under the Sun.

A novel from the author of A Separation, an electrifying story about a woman caught between many truths.

An interpreter has come to The Hague to escape New York and work at the International Court. A woman of many languages and identities, she is looking for a place to finally call home.

She’s drawn into simmering personal dramas: her lover, Adriaan, is separated from his wife but still entangled in his marriage. Her friend Jana witnesses a seemingly random act of violence, a crime the interpreter becomes increasingly obsessed with as she befriends the victim’s sister. And she’s pulled into an explosive political controversy when she’s asked to interpret for a former president accused of war crimes.

A woman of quiet passion, she confronts power, love, and violence, both in her personal intimacies and in her work at the Court. She is soon pushed to the precipice, where betrayal and heartbreak threaten to overwhelm her, forcing her to decide what she wants from her life.

"Katie Kitamura is one of the boldest, most mysterious writers we have. Intimacies is 200-odd pages of sharp ideas and moral jostling, full of characters that make even the ground under your feet feel unreliable. "Classic Kitamura" may not be an industry-wide term just yet, but it's coming. She's coming for us all."
—Wesley Minter, Third Place Books

“A novel about the ruthlessness of power, the check of virtue, and the purportedly neutral bureaucracy meant to mediate between them. Katie Kitamura is among the most brilliant and profound writers at work today; she reminds me how high the moral stakes of fiction can be.”
—Garth Greenwell, author of Cleanness

Katie Kitamura’s most recent novel, A Separation, was a finalist for the Premio von Rezzori and a New York Times Notable Book. It was named a best book of the year by over a dozen publications, translated into 16 languages, and is being adapted for film. Her two previous novels, Gone To The Forest and The Longshot, were both finalists for the New York Public Library’s Young Lions Fiction Award. A recipient of fellowships from the Lannan Foundation and Santa Maddalena, Katie has written for publications including The New York Times, The Guardian, Granta, BOMB, Triple Canopy, and Frieze. She teaches in the creative writing program at New York University.

Alexandra Kleeman is the author of Intimations, a short story collection, and the novel You Too Can Have a Body Like Mine, which was a New York Times Editor’s Choice. Her fiction has been published in The New Yorker, The Paris Review, Zoetrope, Conjunctions, and Guernica, among other publications, and her other writing has appeared in Harper’s, The New York Times Magazine, Vogue, Tin House, n+1, and The Guardian. Her work has received fellowships and support from Bread Loaf, the Djerassi Resident Artists Program, the Virginia Center for the Creative Arts, and the Headlands Center for the Arts. She is the winner of the Berlin Prize and the Bard Fiction Prize, and was a Rome Prize Literature Fellow at the American Academy in Rome. She lives in Staten Island and teaches at the New School.