Virtual Event: Karen McManus and Ruth Ware in conversation with Holly Jackson — You'll Be the Death of Me & One by One 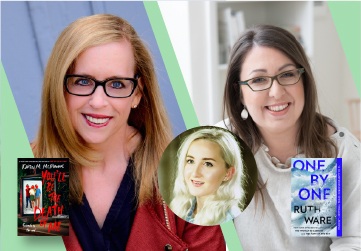 Third Place Books is thrilled to welcome bestselling authors Karen McManus and Ruth Ware for a scintillating conversation on their new books, You'll Be the Death of Me and the paperback release of One by One. This event will be moderated by Holly Jackson, author of A Good Girl's Guide to Murder; Good Girl, Bad Blood; and As Good as Dead.

Please note: Signed editions of You'll Be the Death of Me by Karen McManus are available for this event! Order now to ensure your copy.

About You'll Be the Death of Me by Karen McManus. . .

From the author of One of Us Is Lying comes a brand-new pulse-pounding thriller. It’s Ferris Bueller’s Day Off with murder when three old friends relive an epic ditch day, and it goes horribly—and fatally—wrong.

Ivy, Mateo, and Cal used to be close. Now all they have in common is Carlton High and the beginning of a very bad day. Type A Ivy lost a student council election to the class clown, and now she has to face the school, humiliated. Heartthrob Mateo is burned out from working two jobs since his family’s business failed. And outsider Cal just got stood up… again.

So when the three unexpectedly run into each other, they decide to avoid their problems by ditching. Just the three of them, like old times. Except they’ve barely left the parking lot before they run out of things to say…

…until they spot another Carlton High student skipping school—and follow him to the scene of his own murder. In one chance move, their day turns from dull to deadly. And it’s about to get worse. It turns out Ivy, Mateo, and Cal still have some things in common… like a connection to the dead kid. And they’re all hiding something.

Could it be that their chance reconnection wasn’t by chance after all?

Praise for You'll Be the Death of Me by Karen McManus. . .

“With fast pacing and her signature flair for the dramatic, McManus weaves a masterful tale of secrets, lies, and twisted intentions that will be sure to keep readers guessing whodunit, from start to finish.”
—Booklist, starred review

“A master of the teen thriller delivers again”
—Kirkus Reviews

The #1 New York Times bestselling author of The Turn of the Key and In a Dark, Dark Wood returns with another suspenseful thriller set on a snow-covered mountain.

Getting snowed in at a luxurious, rustic ski chalet high in the French Alps doesn’t sound like the worst problem in the world. Especially when there’s a breathtaking vista, a full-service chef and housekeeper, a cozy fire to keep you warm, and others to keep you company. Unless that company happens to be eight coworkers… each with something to gain, something to lose, and something to hide.

When the cofounder of Snoop, a trendy London-based tech start-up, organizes a weeklong trip for the team in the French Alps, it starts out as a corporate retreat like any other: PowerPoint presentations and strategy sessions broken up by mandatory bonding on the slopes. But as soon as one shareholder upends the agenda by pushing a lucrative but contentious buyout offer, tensions simmer and loyalties are tested. The storm brewing inside the chalet is no match for the one outside, however, and a devastating avalanche leaves the group cut off from all access to the outside world. Even worse, one Snooper hadn’t made it back from the slopes when the avalanche hit.

As each hour passes without any sign of rescue, panic mounts, the chalet grows colder, and the group dwindles further… one by one.

“[Ware] sets the bar higher in One By One by burying her principal players in an Alpine chalet beneath an avalanche. . . . Readers will recognize the obvious homage to Agatha Christie’s And Then There Were None, but with enough ingenious twists to make this whodunit another triumph for Ware.”
—The New York Times Book Review

“Not only do Ware’s novels wink at [Agatha] Christie in a saucy way, but Ware herself is turning out to be as ingenious and indefatigable as the Queen of Crime.”
—The Washington Post

Karen M. McManus earned her BA in English from the College of the Holy Cross and her MA in journalism from Northeastern University. She is the #1 New York Times bestselling author of One of Us Is Lying, Two Can Keep a Secret, One of Us Is Next, The Cousins, and You’ll Be the Death of Me. Her work has been published in more than 40 languages.

Ruth Ware worked as a waitress, a bookseller, a teacher of English as a foreign language, and a press officer before settling down as a full-time writer. She now lives with her family in Sussex, on the south coast of England. She is the #1 New York Times and Globe and Mail (Toronto) bestselling author of In a Dark, Dark Wood; The Woman in Cabin 10; The Lying Game; The Death of Mrs. Westaway; The Turn of the Key; One by One; and The It Girl.

Holly Jackson is the author of the #1 New York Times bestseller, A Good Girl's Guide to Murder. She started writing stories at a young age, completing her first (poor) attempt at a novel when she was fifteen. She graduated from the University of Nottingham, where she studied literary linguistics and creative writing, with a master's degree in English. She enjoys playing video games and watching true-crime documentaries so she can pretend to be a detective. She lives in London.