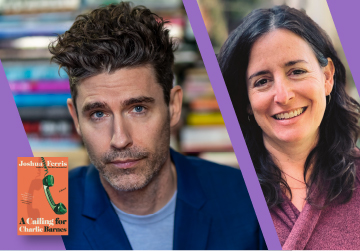 Third Place Books welcomes National Book Award and Booker Prize finalist Joshua Ferris for the release of his latest novel, A Calling for Charlie Barnes, hailed by Andrew Sean Greer as "Not just a daredevil of a novel, but something truly new.” Ferris will be joined in conversation by Aimee Bender, the author of The Particular Sadness of Lemon Cake and, most recently, The Butterfly Lampshade.

About A Calling for Charlie Barnes. . .

From a National Book Award Finalist comes a "compassionate" novel about a modern American family and a man on a secret mission to uncover the world's hidden truths—until his two lives come crashing together (Publishers Weekly, starred review).

Someone is telling the story of the life of Charlie Barnes, and it doesn't appear to be going well. Too often divorced, discontent with life's compromises and in a house he hates, this lifelong schemer and eternal romantic would like out of his present circumstances and into the American dream. But when the twin calamities of the Great Recession and a cancer scare come along to compound his troubles, his dreams dwindle further, and an infinite past full of forking paths quickly tapers to a black dot.

Then, against all odds, something goes right for a change: Charlie is granted a second act. With help from his storyteller son, he surveys the facts of his life and finds his true calling where he least expects it—in a sacrifice that redounds with selflessness and love—at last becoming the man his son always knew he could be.

A Calling for Charlie Barnes is a profound and tender portrait of a man whose desperate need to be loved is his downfall, and a brutally funny account of how that love is ultimately earned.

Praise for A Calling for Charlie Barnes. . .

“Brilliant, funny, heartbreaking--Ferris has taken the Updike-Roth model and set it spinning with masterly narrative fireworks. Family, memory, ambition and death, all told with dervishing glee. Not just a daredevil of a novel, but something truly new.”
—Andrew Sean Greer, author of Less

"Joshua Ferris is one of our best writers, and A Calling for Charlie Barnes is wonderful: fast and deep, urgent and brilliant.  Ingeniously written, it had me up reading late into the night.   A hilarious, intimate, and scathing takedown of so many American vanities."
—Dana Spiotta, author of Wayward

"If Augie March was a “Columbus of the near-at-hand,” Charlie Barnes is a whole America: a dreaming, scheming paterfamilias forever “expanding out to the coasts” and outstripping whatever inconvenient facts or exuberant fictions might hope to contain him. Is he for real? Are any of us? This much is certain: Funny, moving, and formally a work of genius, A Calling for Charlie Barnes is quite literally the book Joshua Ferris was born to write."
—Garth Risk Hallberg, author of City on Fire

"A Calling for Charlie Barnes is the unexpected masterpiece about fathers and sons from one of the tenderest writers at work today. It's a rare thrill to read a book that a novelist must write, to witness a veteran in the act of discovering or re-discovering."
—Spencer Ruchti, Third Place Books

Joshua Ferris is the author of three previous novels, Then We Came to the End, The Unnamed and To Rise Again at a Decent Hour, and a collection of stories, The Dinner Party. He was a finalist for the National Book Award, winner of the Barnes and Noble Discover Award and the PEN/Hemingway Award, and was named one of The New Yorker's "20 Under 40" writers in 2010. To Rise Again at a Decent Hour won the Dylan Thomas Prize and was shortlisted for the Booker Prize. His short stories have appeared in The New Yorker, Granta, and Best American Short Stories. He lives in New York.

Aimee Bender is the author of the novels The Particular Sadness of Lemon Cake—a New York Times bestseller—and An Invisible Sign of My Own, and of the collections The Girl in the Flammable Skirt, Willful Creatures, and The Color Master. Her works have been widely anthologized and have been translated into sixteen languages. She lives in Los Angeles.