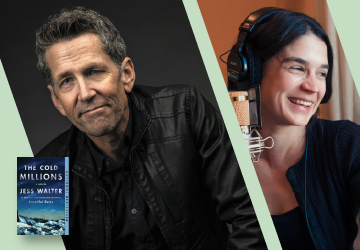 Third Place Books is proud to host Spokane author Jess Walter, bestselling author of Beautiful Ruins and The Financial Lives of the Poets, to celebrate the paperback release of his novel, The Cold Millions. He will be joined in conversation by Katy Sewall, KUOW host and creator of The Bittersweet Life podcast.

Registration is free through Eventbrite. Signed copies are available with book-bundled tickets purchased on Eventbrite!

About The Cold Millions. . .

“The Cold Millions is a literary unicorn: a book about socio-economic disparity that’s also a page-turner, a postmodern experiment that reads like a potboiler, and a beautiful, lyric hymn to the power of social unrest in American history. It’s funny and harrowing, sweet and violent, innocent and experienced; it walks a dozen tightropes. Jess Walter is a national treasure.”—Anthony Doerr, author of All the Light We Cannot See

“A spirited and expansive novel. . . . Filled with a gusto that honors the beauty of believing in societal change and simultaneously recognizes the cruel limits of the possible.” —Wall Street Journal

The Dolans live by their wits, jumping freight trains and lining up for day work at crooked job agencies. While sixteen-year-old Rye yearns for a steady job and a home, his older brother, Gig, dreams of a better world, fighting alongside other union men for fair pay and decent treatment. Enter Ursula the Great, a vaudeville singer who performs with a live cougar and introduces the brothers to a far more dangerous creature: a mining magnate determined to keep his wealth and his hold on Ursula.

Dubious of Gig’s idealism, Rye finds himself drawn to a fearless nineteen-year-old activist and feminist named Elizabeth Gurley Flynn. But a storm is coming, threatening to overwhelm them all, and Rye will be forced to decide where he stands. Is it enough to win the occasional battle, even if you cannot win the war?

An intimate story of brotherhood, love, sacrifice, and betrayal set against the panoramic backdrop of an early twentieth-century America, The Cold Millions offers a kaleidoscopic portrait of a nation grappling with the chasm between rich and poor, between harsh realities and simple dreams.

Praise for The Cold Millions. . .

“Jess Walter is a superb storyteller. His plot rolls on at a steady pace. His ear for dialogue, whatever the character, is acute. He knows when to amp up the prose with a telling metaphor…. As polished and hard as a diamond, The Cold Millions reminds us of America’s tempestuous past and suggests that all this is anything but past.”
—Boston Globe

“It’s a tremendous work, a vivid, propulsive, historical novel with a politically explosive backdrop that reverberates through our own.”
—USA Today

“Masterly. . . . Shifting perspectives and sharp plot twists contribute to the richness of the story, bringing a tumultuous time in American history to life. Walter illustrates how injustice can galvanize young men but also wreck them.”
—The New Yorker

Jess Walter is the author of The Cold Millions, the #1 New York Times bestseller Beautiful Ruins, the national bestseller The Financial Lives of the Poets, the National Book Award finalist The Zero, the Edgar Award-winning Citizen Vince, Land of the Blind, the New York Times Notable Book Over Tumbled Graves, and the story collection We Live in Water. He lives in Spokane, Washington, with his family.

Katy Sewall the creator and host of The Bittersweet Life podcast. She's also a writer, podcast consultant, and a weekend host on KUOW Public Radio.