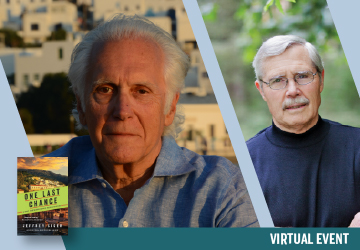 Third Place Books welcomes mystery writer Jeffrey Siger for a presentation of his latest thriller, One Last Chance. Perfect for the armchair traveler and mystery lover, this is the 12th installment in the Chief Inspector Andreas Kaldis Mysteries series. Siger will be in conversation with Warren C. Easley.

When Chief Inspector Andreas Kaldis's longtime assistant, Maggie, returns to her ancestral home on Ikaria for her 104-year-old grandmother's funeral, she quickly realizes not only was Yiayia likely murdered, but that a series of other long-lived Ikariots had recently died under the same suspicious circumstances. Back in Athens, Andreas and his chief detective Yianni pursue a smuggling and protection ring embedded in the Greek DEA, and its possible involvement in the assassination of an undercover cop.

These two cases don't appear to be related...but then Maggie and Yianni uncover a connection between their respective leads in the elder-killings on Ikaria and the DEA corruption case, and they realize that there are international intrigues far more dangerous at play than anyone had imagined.

"An engrossing procedural...discover the gorgeous aspects of Greek life in a mystery."
—Library Journal

"Siger balances the conflict that fuels the plot with vivid descriptions of the culture, food, and glorious settings of this off-the-beaten-track Greek island. Endearing supporting characters add to the fun. Travel buffs will be enchanted."
—Publishers Weekly

''Siger creates a heady mix of Greek politics and culture, drawing on the ancient practice of banishment, the country's student revolutionaries, and its notoriously corrupt officials . . . This is international police procedural writing at its best.''
—Booklist

A former Wall Street lawyer, Jeffrey Siger fled his career as a name partner in his own Manhattan law firm to live on a Greek island and write mystery thrillers set in Greece. The New York Times picked him as Greece’s thriller novelist of record, and Greece named him as one of six authors—and only American—writing mysteries serving as a guide to Greece. He’s received Lefty and Barry “Best Novel” nominations, been Chair of Bouchercon, and served as adjunct professor of English at Washington & Jefferson College teaching mystery writing.  His work is uniformly praised for its attractive characters and rich detail. The 12th book in his Andreas Kaldis series, One Last Chance, is set on the Aegean Island of Ikaria with its storied past of pirates and conquerors, and current worldwide reputation for the longevity of its people.

Formerly a research scientist and international business executive, Warren C. Easley lives in Oregon where he writes fiction, tutors GED students, fly fishes and skis. Easley is the author of the Cal Claxton Mysteries published by Poisoned Pen Press/Sourcebooks.  His short stories have received numerous awards including a Kay Snow Award for fiction in 2012 and he was named the Northwest’s Up and Coming Author in 2017, both honors bestowed by Willamette Writers.  The fifth book in the series, Blood for Wine, was one of five books in the nation nominated for a Nero Wolfe Award for excellence in crime fiction. No Witness, book 8 in the series, received the coveted Spotted Owl Award for the best mystery written by a writer in the greater Pacific Northwest.