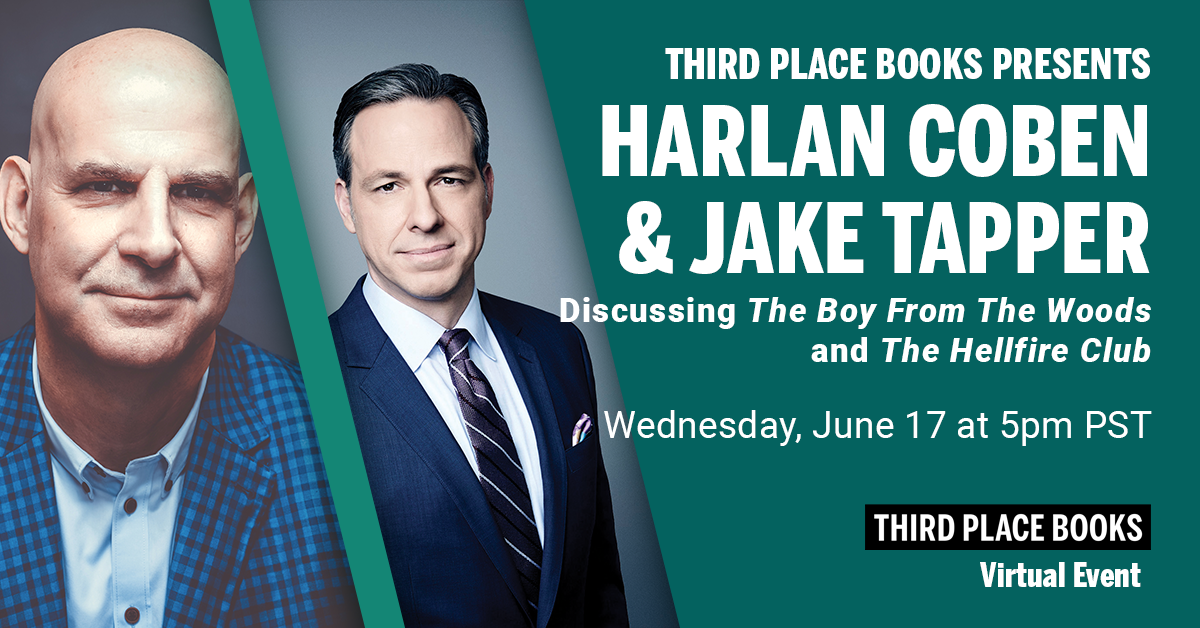 This is a virtual event! Join this Livestream Event here!

Join Third Place Books for a riveting conversation between bestselling novelist Harlan Coben, author of The Boy From The Woods, and Jake Tapper, CNN Anchor and author of The Hellfire Club!

In The Boy From The Woods, Harlan Coben introduces us to Wilde, a man who is a mystery to everyone, including himself. Decades ago, Wilde was found as a boy living feral in the woods with no memory of his past.  Now, thirty years later, he’s a highly trained ex-military operative who still knows nothing about his personal history.   And he's back living in the same woods on the outskirts of town, content to be an outcast with only a few deep connections to other people. When a local girl goes missing, famous TV lawyer Hester Crimstein--with whom Wilde shares a tragic connection--asks him to use his unique skills to help find her.   Wilde returns to the community where he has never fit in, and where the powerful are protected even when they harbor secrets that could destroy the lives of millions . . . secrets that Wilde must uncover before it's too late.

A young Congressman stumbles on the powerful political underworld of 1950's D.C. in The Hellfire Club, which David Baldacci calls "a potent thriller."  Charlie Marder is an unlikely Congressman. Thrust into office by his family ties after his predecessor died mysteriously, Charlie is struggling to navigate the dangerous waters of 1950s Washington, DC, alongside his young wife Margaret, a zoologist with ambitions of her own. Amid the swirl of glamorous and powerful political leaders and deal makers, a mysterious fatal car accident thrusts Charlie and Margaret into an underworld of backroom deals, secret societies, and a plot that could change the course of history. When Charlie discovers a conspiracy that reaches the highest levels of governance, he has to fight not only for his principles and his newfound political career...but for his life.

With more than seventy-five million books in print worldwide, Harlan Coben is the #1 New York Times bestselling author of numerous suspense novels, including Run Away, Don't Let Go, Home, and Fool Me Once, as well as the multi-award-winning Myron Bolitar series. His books are published in forty-four languages around the globe and have been number one bestsellers in more than a dozen countries.  His Netflix series include Safe, starring Michael C. Hall, and his adaptation of his novel The Stranger, headlined by Richard Armitage. He lives in New Jersey.

CNN anchor and Chief Washington Correspondent Jake Tapper joined the network in January 2013. The Lead with Jake Tapper, his one-hour weekday program, debuted in March 2013. Tapper was named host of the network's Sunday morning show, State of the Union, in June 2015. Tapper has been a widely respected reporter in the nation's capital for more nearly 20 years. He is also the author of the bestseller The Outpost and the novel The Hellfire Club.