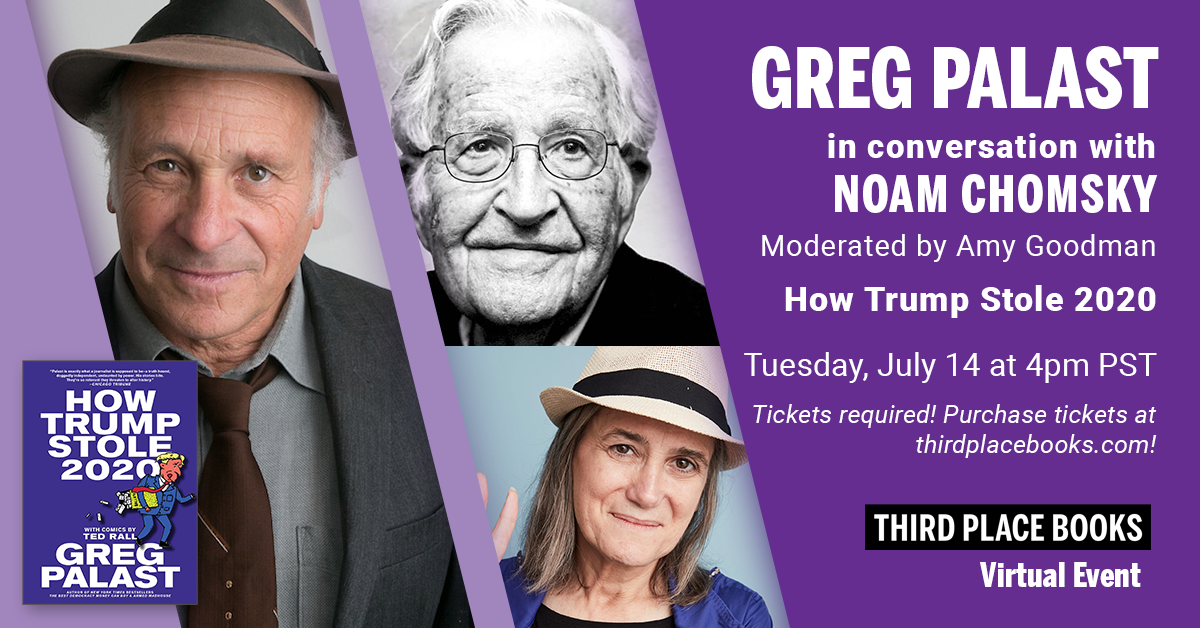 Tickets are required to attend this livestream event!

Vote theft is the key issue to the 2020 Election and Palast is the expert to explain why....

Has Trump already stolen the 2020 election? Vote theft was once considered to be a marginal issue that no one wanted to talk about, but as the stakes have risen and the facts have become known--in large part thanks to this author--it is now recognized as one of the central issues deciding our presidential elections.

The scope is staggering. In the Georgia 2018 midterm election alone--the testing ground--Republican voting officials quietly removed half a million voters from the voter rolls--including Martin Luther King's ninety-two-year-old cousin Christine Jordan. How Trump Stole 2020 is the story of the racially poisonous schemes to steal the 2020 election, the political operatives behind the trickery--and the hard right billionaires funding it all, written by the investigative reporter who has been covering this story from the outset.

Greg Palast regularly contributes original reporting to the BBC, The Guardian, Democracy Now, The Young Turks, and other progressive media. He has been featured recently on among others MSNBC's Joy Reid show and in Salon, and in the New York Times and Washington Post for successfully suing the state of Georgia with Stacey Abrams to release voter rolls after she lost a congressional seat to Brian Kemp who was at the time also the overseer of the voter rolls. Palast's two-decade hunt of elections chicanery are detailed in his books, The Best Democracy Money Can Buy (2002), Armed Madhouse (2006), and Billionaires & Ballot Bandits (2012)--all New York Times bestsellers. In 2000, his investigation for the BBC and the Guardian uncovered how the Bush family purged thousands of Black men from Florida voter rolls, falsely labeling them felons, the scheme that won Bush the White House. In 2016, Palast predicted Trump's "surprise" election months earlier in a Rolling Stone exposé detailing exactly how Trump's operatives, in control of voting offices in key states, would bend the election results. Palast lives in Los Angeles, CA.

Noam Chomsky is Professor, Department of Linguistics and Philosophy, at the Massachusetts Institute of Technology.

Amy Goodman is the host and executive producer of Democracy Now! An acclaimed international journalist, she has won the Right Livelihood Award, widely known as the Alternative Nobel Prize; a lifetime achievement award from Harvard's Nieman Foundation for Journalism; the George Polk Award; Robert F. Kennedy Prize for International Reporting; and the Alfred I. duPont-Columbia Award. Amy is the New York Times bestselling author, with Denis Moynihan, of The Silenced Majority and Breaking the Sound Barrier; and with David Goodman, of Democracy Now!, Exception to the Rulers, Static, and Standing Up to the Madness. She is a syndicated columnist for King Features.