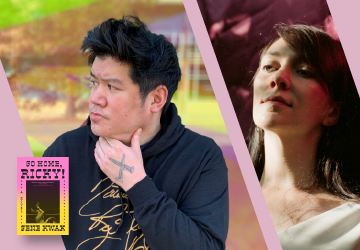 Third Place Books is pleased to welcome Gene Kwak for the release of his highly anticipated debut novel, Go Home, Ricky! He will be joined in conversation by Catherine Lacey, author of Pew, Certain American States, and Nobody is Ever Missing, amongst others.

From a rising literary star comes a fresh, satirical novel about masculinity and tenderness, fatherhood and motherhood, set in the world of semi-professional wrestling

After seven years on the semi-pro wrestling circuit, Ricky Twohatchet, a.k.a. Richard Powell, needs one last match before he gets called up to the big leagues. Unlike some wrestlers who only play the stereotype, Ricky believes he comes by his persona honestly—he’s half white and half Native American—even if he’s never met his father. But the night of the match in Omaha, Nebraska, something askew in their intricate choreography sets him on a course for disaster. He finishes with a neck injury that leaves him in a restrictive brace and a video already going viral: him spewing profanities at his ex-partner, Johnny America. Injury aside, he’s out of the league.

Without a routine or identity, Ricky spirals downward, finally setting off to learn about his father, and what he finds will explode everything he knows about who he is—as a man, a friend, a son, a partner, and a wrestler. Go Home, Ricky! is a sometimes-witty, sometimes-heart-wrenching, but always gripping look into the complexities of identity.

"An acerbic and hilarious hyper-masculine debut picaresque... As a prose stylist, Kwak is impeccable. Every sentence is explosive, energetic, confident and hyper-polished, as if meant to be shouted proudly in a stadium of thousands.”
—Publishers Weekly, starred review

“Go Home, Ricky! is a rambunctious and constantly surprising novel about wrestling, absent fathers and father figures, and the personas we’ll wear on the way to figuring out who we really are. Kwak’s sly, big-hearted novel resists easy answers, making Ricky’s odyssey all the more satisfying and true."
—Gabe Habash, author of Stephen Florida

“It's impossible not to root for underdog wrestler Ricky Twohatchet, a scrappy, good-natured bigmouth with very bad luck. Bleak, funny, and bittersweet, Go Home Ricky! is about finding your people and finding your place in the world. Gene Kwak’s playful, adroit prose is as offbeat as it is heartfelt—this is an unforgettable debut.”
—Kimberly King Parsons, author of Black Light: Stories

“Gene Kwak writes with a head-spinning musicality and depth of spirit that cannot be denied. Each sentence sparkles like a gemstone just cracked open, rewarding the attentive ear with ecstatic nuance, vibrant rhythm, a way of seeing and speaking you can come to through no one else but him. Pull out any line from Go Home, Ricky! and you will find immediate evidence of a new classic culled deep from the heart of America, with no holds barred style to spare. In no small terms, Kwak is a must.”
—Blake Butler, author of Alice Knott

Gene Kwak has published fiction and nonfiction both in print and online in the Los Angeles Review of Books, the Rumpus, Wigleaf, Redivider, Hobart, Electric Literature, and the flash anthology Forward: 21st Century Flash Fiction. He  teaches at the University of Nebraska Omaha. Go Home, Ricky! is his debut novel.

Catherine Lacey is the author of the novels Nobody Is Ever Missing and The Answers and the short-story collection Certain American States. She has earned a Guggenheim Fellowship, a Whiting Award, and a New York Foundation for the Arts Fellowship. She was a finalist for the New York Public Library’s Young Lions Fiction Award, and was named one of Granta’s Best of Young American Novelists. Her essays and short fiction have appeared in The New Yorker, Harper’s Magazine, The New York Times, The Believer, and elsewhere. Born in Mississippi, she is based in Chicago. (Photo credit: Lawrence Agyei)