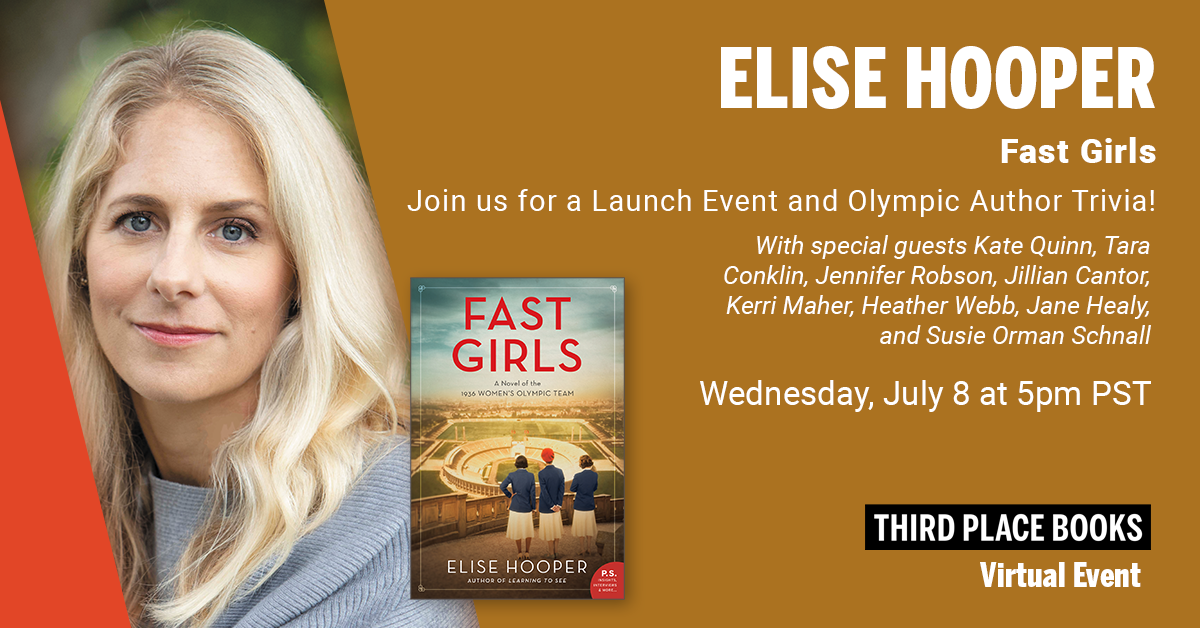 Virtual Event
This is a virtual event. Register for this Livestream Event here!
PLEASE NOTE THAT THIS EVENT HAS A NEW DATE! THIS EVENT WILL NOW TAKE PLACE ON WEDNESDAY, JULY 8 at 5pm PST!
Join Elise Hooper (author of LEARNING TO SEE and THE OTHER ALCOTT) for an evening of stories, history, and Olympic trivia to celebrate the release of her new novel FAST GIRLS! Hooper will be joined by Kate Quinn, Tara Conklin, Jennifer Robson, Jillian Cantor, Kerri Maher, Heather Webb, Jane Healy, and Susie Orman Schnall.

Acclaimed author Elise Hooper explores the gripping, real life history of female athletes, members of the first integrated women's Olympic team, and their journeys to the 1936 summer games in Berlin, Nazi Germany. Perfect for readers who love untold stories of amazing women, such as The Only Woman in the Room, Hidden Figures, and The Lost Girls of Paris.

In the 1928 Olympics, Chicago's Betty Robinson competes as a member of the first-ever women's delegation in track and field. Destined for further glory, she returns home feted as America's Golden Girl until a nearly-fatal airplane crash threatens to end everything.

Outside of Boston, Louise Stokes, one of the few black girls in her town, sees competing as an opportunity to overcome the limitations placed on her. Eager to prove that she has what it takes to be a champion, she risks everything to join the Olympic team.

From Missouri, Helen Stephens, awkward, tomboyish, and poor, is considered an outcast by her schoolmates, but she dreams of escaping the hardships of her farm life through athletic success. Her aspirations appear impossible until a chance encounter changes her life.

These three athletes will join with others to defy society's expectations of what women can achieve. As tensions bring the United States and Europe closer and closer to the brink of war, Betty, Louise, and Helen must fight for the chance to compete as the fastest women in the world amidst the pomp and pageantry of the Nazi-sponsored 1936 Olympics in Berlin.

A New Englander by birth (and at heart), Elise Hooper lives with her husband and two young daughters in Seattle, where she teaches history and literature.