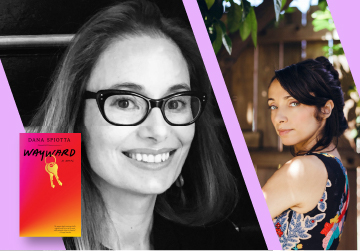 Third Place Books welcomes Dana Spiotta—the critically-acclaimed author of Innocents and Others, Stone Arabia, Eat the Document, and more—for a reading of her highly-anticipated novel, Wayward. She will be joined in conversation by Chanelle Benz, author of The Gone Dead.

A moving, funny, engrossing novel about mothers and daughters, and one woman’s midlife reckoning, from the renowned author of Stone Arabia and Eat the Document

On the heels of the election of 2016, Samantha Raymond’s life begins to come apart: her mother is ill, her teenage daughter is increasingly remote, and at fifty-two she finds herself staring into “the Mids”—that hour of supreme wakefulness between three and four in the morning in which women of a certain age suddenly find themselves contemplating motherhood, mortality, and, in this case, the state of our unraveling nation.

When she falls in love with a beautiful, decrepit house in a hardscrabble neighborhood in Syracuse, she buys it on a whim and flees her suburban life—and her family—as she grapples with how to be a wife, a mother, and a daughter, in a country that is coming apart at the seams.

Dana Spiotta’s Wayward is a stunning novel about aging, about the female body, and about female difficulty—female complexity—in the age of Trump. Probing and provocative, brainy and sensual, it is a testament to our weird, off-kilter America, to reforms and resistance and utopian wishes, and to the beauty of ruins. Tremendous new work from one of the most gifted writers of her generation.

“An urgent, deeply moving, wholly original novel by one of the most wildly talented writers in America. This is Spiotta’s best book yet, rich with all the joyful immersion-in-culture that characterized her earlier work, and of which she is a master, but with, it seems to me, more heart, hope, and urgency. There’s not a smarter, more engaging, more celebratory writer working today than Dana Spiotta, and here she shows us to ourselves with stunning, sometimes lacerating, honesty, but also with a feeling of genuine hope for us, i.e., with kindness. I finished the book last night and woke this morning both fonder of, and more terrified for, America.”
—George Saunders, author of Lincoln in the Bardo

“A dazzling lightning bolt of a novel which illuminates the sometimes exhilarating, sometimes heartbreaking moments of connection and disconnection in our lives. What begins as a vertiginous leap into hilarious rabbit holes ends as a brilliant meditation on mortality and time. How does she do it? Only Dana Spiotta knows. I’m just happy to see her work her magic.”
—Jenny Offill, author of Weather

“What a thrilling experience to take a wayward journey along with Dana Spiotta’s heroine, in the social landscape of America when America is probing its future, in a woman’s complex internal landscape as she forges forward. Wayward is a fiercely funny and deliciously subversive novel.”
—Yiyun Li, author of Must I Go

“Wayward is a strikingly human and affecting story. . . gloriously cool, deftly assembled, brimming with mood. . .  a hymn to iconoclasm, a piercing novel about what we lose and gain by when we step out of life’s deepest worn grooves.”
—Vogue’s “Best Books to Read in 2021”

Dana Spiotta is the author of Innocents and Others, which won the St. Francis College Literary Prize and was short-listed for The Los Angeles Times Book Prize; Stone Arabia, which was a National Book Critics Circle Award finalist; Eat the Document, which was a National Book Award finalist; and Lightning Field. Spiotta was a Guggenheim Fellow, a New York Foundation for the Arts Fellow, and she won the 2008-9 Rome Prize from the American Academy in Rome. In 2017, the American Academy of Arts and Letters awarded her the John Updike Prize in Literature. Spiotta lives in Syracuse and teaches in the Syracuse University MFA program.

Chanelle Benz has published short stories in Guernica, Granta.com, Electric Literature, The American Reader, Fence and The Cupboard, and is the recipient of an O. Henry Prize. Her story collection The Man Who Shot Out My Eye Is Dead was published in 2017 by Ecco. It was named a Best Book of 2017 by The San Francisco Chronicle and one of Electric Literature’s 15 Best Short Story Collections of 2017. It was also longlisted for the 2018 PEN/Robert Bingham Prize for Debut Fiction. She currently lives in Memphis where she teaches at Rhodes College.