Virtual Event! Corinne Manning & Carter Sickels - We Had No Rules & The Prettiest Star 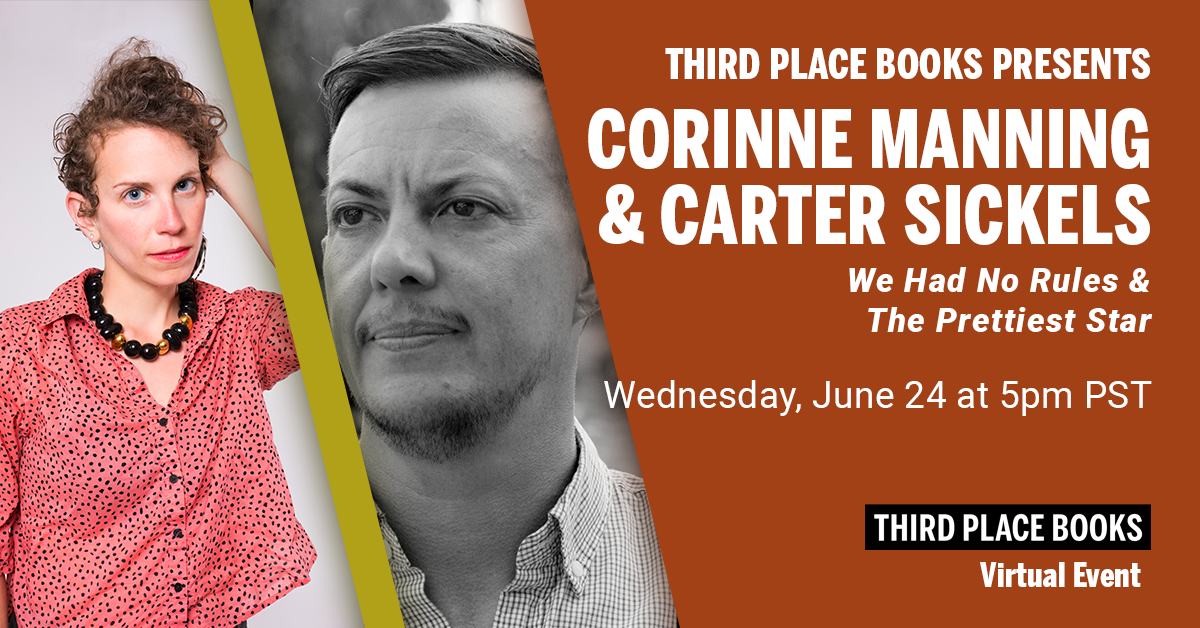 This is a virtual author event! Sign up for this Livestream Event here!

A young teenager stays a step ahead of her parents' sexuality-based restrictions by running away and learns a very different set of rules. A woman grieves the loss of a sister, a "gay divorce," and the pain of unacknowledged abuse with the help of a lone wallaby on a farm in Washington State. A professor of women's and gender studies revels in academic and sexual power but risks losing custody of the family dog.  In Corinne Manning's stunning debut story collection, a cast of queer characters explore the choice of assimilation over rebellion. In this historical moment that's hyperaware of and desperate to define even the slowest of continental shifts, when commitment succumbs to the logic of capitalism and nobody knows what to call each other or themselves - Gay? Lesbian? Queer? Partners? Dad? - who are we? And if we don't know who we are, what exactly can we offer each other?  Spanning the years 1992 to 2019, and moving from New York to North Carolina to Seattle, the eleven first-person stories in We Had No Rules feature characters who feel the promise of a radically reimagined world but face complicity instead.

A stunning novel about the bounds of family and redemption, The Prettiest Star shines light on an overlooked part of the AIDs epidemic when men returned to their rural communities to die, from Lambda Literary Emerging Writer Award-winning author Carter Sickels. Six short years after Brian Jackson moved to New York City in search of freedom and acceptance, AIDS has claimed his lover, his friends, and his future. With nothing left in New York but memories of death, Brian decides to write his mother a letter asking to come back to the place, and family, he was once so desperate to escape.The Prettiest Star is told in a chorus of voices: Brian's mother Sharon; his fourteen-year-old sister, Jess, as she grapples with her brother's mysterious return; and the video diaries Brian makes to document his final summer. This is an urgent story about the politics and fragility of the body, of sex and shame. Above all, Carter Sickels's stunning novel explores the bounds of family and redemption. It is written at the far reaches of love and understanding, centering on the moments where those two forces stretch toward each other and sometimes touch.

Corinne Manning is a prose writer and literary organizer. Their stories and essays have been published widely, including in Toward an Ethics of Activism and Shadow Map: An Anthology of Survivors of Sexual Assault. Corinne founded The James Franco Review, a project that sought to address implicit bias in the publishing industry.

Carter Sickels is the author of the novel The Evening Hour. He is the recipient of the 2013 Lambda Literary Emerging Writer Award, and has been awarded scholarships to Bread Loaf Writers' Conference, the Sewanee Writers' Conference, VCCA, and the MacDowell Colony. His essays and fiction have appeared in various publications, including Guernica, Bellevue Literary Review, and BuzzFeed, and he is the editor of Untangling the Knot: Queer Voices on Marriage, Relationships & Identity. Carter is Assistant Professor of English at Eastern Kentucky University, where he teaches in the Bluegrass Writers Studio Low-Residency MFA program. He lives in Lexington, KY.