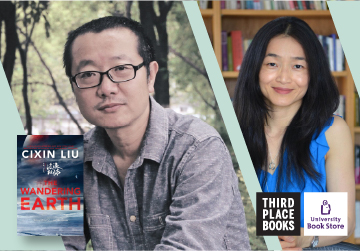 This is a virtual event taking place via Zoom Webinar. Purchase tickets on Eventbrite.

Third Place Books and University Bookstore (Seattle) are honored to present a virtual event with science fiction writer Cixin Liu—eight-time winner of the Galaxy Award, recipient of the Chinese Nebula, and author of the Hugo Award-winning Three Body Trilogy, for a discussion on his latest collection of stories, The Wandering Earth, translated from the Chinese by Ken Liu, Elizabeth Hanlon, Zac Haluza, Adam Lanphier, and Holger Nahm. Cixin Liu will be joined in conversation by Professor Jing Tsu, the John M. Schiff Professor of East Asian Languages and Literatures & Comparative Literature at Yale University.

All tickets include a copy of The Wandering Earth shipped to the address you provide. Please note: Third Place Books CANNOT offer international shipping at this time.

UPDATE 10/7/21: Due to an unavoidable conflict, Rebecca F. Kuang, previously scheduled to join Cixin Liu in conversation for this virtual event, is no longer able to attend. We apologize for any inconvenience.

UPDATE 10/24/21: Emily Xueni Jin, previously scheduled to join Cixin Liu in conversation for this virtual event, is also no longer able to attend. We apologize for any inconvenience.

This is a virtual event

About The Wandering Earth. . .

These ten stories, including five Chinese Galaxy Award-winners, are a blazingly original ode to planet Earth, its pasts, and its futures. Liu's fiction takes the reader to the edge of the universe and the end of time, to meet stranger fates than we could have ever imagined.

With a melancholic and keen understanding of human nature, Liu's stories show humanity's attempts to reason, navigate, and above all, survive in a desolate cosmos.

Praise for the work of Cixin Liu. . .

"Liu conjures a sense of wonder while grounding his tales in well-wrought characters. This is a masterwork."
—Publishers Weekly, starred review for The Wandering Earth

"Evokes the thrill of exploration and the beauty of scale."
—The New Yorker on The Three Body Trilogy

Cixin Liu is the most prolific and popular science fiction writer in the People’s Republic of China. Liu is an eight-time winner of the Galaxy Award (the Chinese Hugo) and a winner of the Chinese Nebula Award. Prior to becoming a writer, he worked as an engineer in a power plant. His novels published in English by Tor Books include The Three Body Trilogy, which includes The Three-Body Problem, The Dark Forest, and Death's End; Ball Lightning; and a previous short story collection To Hold Up the Sky.

Jing Tsu is a literary scholar and cultural historian of modern China at Yale University. She is author of four books (two co-edited) and has written for or interviewed by The New York Times, Financial Times, The Washington Post, and The Wall Street Journal. Her upcoming new book tells the dramatic story of how China and its language entered the information age dominated by the western alphabet: Kingdom of Characters: The Language Revolution That Made China Modern (to appear January 18, 2022, Riverhead at Penguin Random House). Her research spans literature, linguistics, science and technology, typewriting and digitalization, diaspora studies, migration, nationalism, and theories of globalization.