Virtual Event! Christopher Paolini - To Sleep in a Sea of Stars (Tickets Required!) 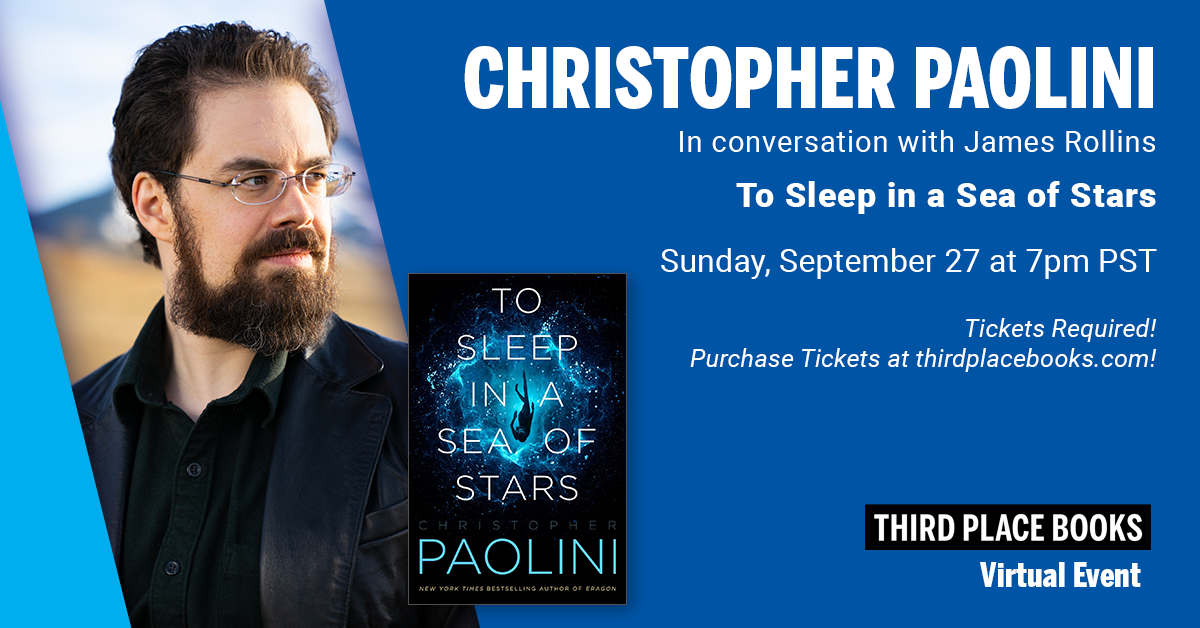 This is a ticketed event. Each ticket purchase includes access to the event, and a copy of Christopher Paolini's new novel TO SLEEP IN A SEA OF STARS.

All ticket holders will receive a special complimentary swag item!

Books will be available for pickup or shipping (within the United States) after the event date.

PLEASE NOTE THAT WE DO NOT SHIP INTERNATIONALLY.

A brand new epic novel from New York Times bestselling author Christopher Paolini.
Exploring new worlds is all Kira Navarez ever dreamed of doing. But now she has found her nightmare.
On a distant planet ripe for a colony, she has discovered a relic previously unseen by human eyes. It will transform her entirely and forever. Humanity will face annihilation.
She is alone. We are not.
There is no going back.
Christopher Paolini was born in Southern California and has lived most of his life in Paradise Valley, Montana. He published his first novel, Eragon, in 2003 at the age of nineteen, and quickly became a publishing phenomenon. His Inheritance Cycle—Eragon and its three sequels—have sold nearly 40 million copies worldwide. To Sleep in a Sea of Stars is his first adult novel.
James Rollins is the author of international thrillers that have been translated into more than forty languages. His Sigma series has been lauded as one of the "top crowd pleasers" (New York Times) and one of the hottest summer reads (People magazine). In each novel, acclaimed for its originality, Rollins unveils unseen worlds, scientific breakthroughs, and historical secrets--and he does it all at breakneck speed and with stunning insight. He lives in the Sierra Nevada mountains.
Third Place Books Events Code of Conduct: Third Place Books is committed to ensuring the safety and well-being of event attendees and guest authors, during both online and in-store events. By registering for this event, you are agreeing to refrain from engaging in inappropriate behavior and harassment of any kind throughout the course of this event (i.e. racial slurs, profanity, hate speech, spam comments, etc.). Please note that any participants who engage in inappropriate behavior or harassment of any kind will be immediately ejected from this event.