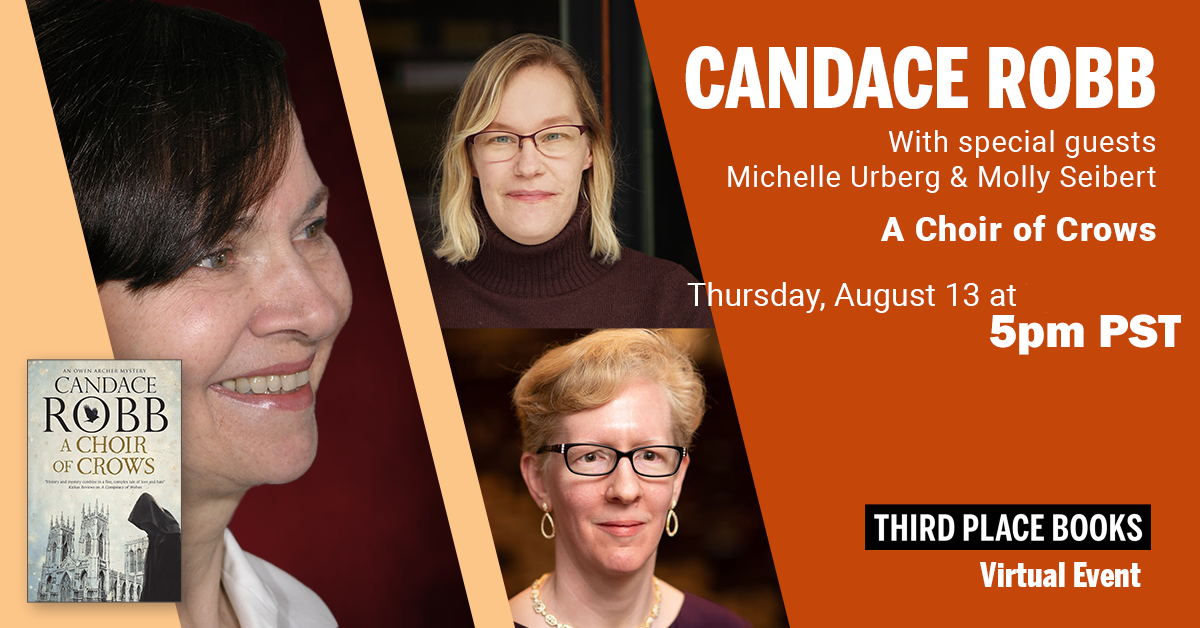 This is a virtual event!
Register for this Livestream Event Here!

When two bodies are discovered in the grounds of York Minster shortly before the enthronement of the new archbishop, Owen Archer is summoned to investigate.

December, 1374. With the great and the good about to descend on York for the enthronement of Alexander Neville as the new archbishop, the city authorities are in a state of high alert. When two bodies are discovered in the grounds of York Minster, and a flaxen-haired youth with the voice of an angel is found locked in the chapter house, Owen Archer, captain of the city bailiffs, is summoned to investigate.

Tension deepens when an enigmatic figure from Owen's past arrives in the city. Why has he returned from France after all these years - and what is his connection with the bodies in the minster yard and the fair singer?

Before Owen can make headway in the investigation, a third body is fished out of the river - and the captain finds himself with three mysterious deaths to solve before the all-powerful Neville family arrives in York.

Candace Robb has read and researched medieval history for many years, having studied for a Ph.D. in Medieval & Anglo-Saxon Literature. She divides her time between Seattle and the UK, frequently visiting York to research the series. She is the author of eleven previous Owen Archer mysteries and three Kate Clifford medieval mysteries.

Michelle Urberg is a medieval musicologist, librarian, and champion of research for the public good. She has studied the music, book culture and gender roles of the Birgittine monastic order in-depth and has been active with the community of scholars who study the Birgittines. Michelle lives in Seattle, where she sings in the Medieval Women’s Choir and serves on its Board of Directors.

Marian Seibert is a soloist with the Medieval Women's Choir. She has performed with many local ensembles and organizations, including the Tudor Choir, St. Mark's Cathedral, the Esoterics, Northwest Baroque, the Early Music Guild, St. James Cathedral, the Trinity Consort, Seattle Baroque Orchestra, Gallery Concerts, Seattle Opera, Northwest Puppet Center, Seattle Experimental Opera, and the Seattle Academy of Opera. She is a featured soloist on the Medieval Women's Choir's CDs, River of Red and Laude Novella, and serves the choir as rehearsal director. She spent time at the Early Music Institute at Indiana University, but most of her education in medieval music came in intensive summer workshops and from many years’ experience with Margriet Tindemans, the founder of the MWC. Other teachers included Barbara Thornton, Benjamin Bagby, Laurie Monihan, Shira Kammen, Karen Clark, Anne Azema, and Eric Mentzel (the choir’s current director). In her other life she works for a letterpress print shop.