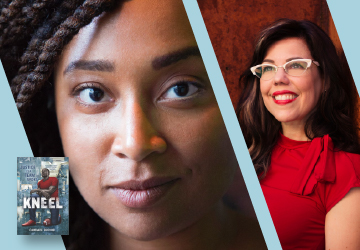 Third Place Books is proud to host former bookseller and YA author Candace Buford for the launch of her debut novel, Kneel, "a fearless debut novel exploring racism, injustice, and self-expression through the story of a promising Black football star in Louisiana." She will be joined in conversation by Martha Brockenbrough, author of Alexander Hamilton, Revolutionary and the forthcoming book Into the Bloodred Woods.

When a high-school football star takes a knee for justice, hatred and social activism go head to head in a small Louisiana town in this raw and powerful debut novel for fans of Angie Thomas and Nic Stone.

For guys like Russell Boudreaux, football is the only way out of their small town. As the team’s varsity tight end, Rus has a singular goal: to get a scholarship and play on the national stage. But when his best friend is unfairly arrested and kicked off the team, Rus faces an impossible choice: speak up or live in fear.

Desperate for change, Rus kneels during the national anthem. In one instant, he falls from local stardom and becomes a target for hatred. But though he may be down, he’s not alone. With the help of his best friend and an unlikely ally, Rus will fight for his dreams…and for justice.

"Debut author Buford delivers a novel that bridges the mighty dreams of Last Chance U with the trenchant social critique of The Hate U Give. Sports’ biggest social movement moment of the decade gets a special homage.”
—Kirkus Reviews, starred review

“Absolutely Timely and gripping. Couldn’t put it down. Speaks to the current social climate, and is a must read. 10/10.”
—Broderick Hunter, actor, model, and activist

"A powerful and timely debut novel, Kneel is a gripping story about what it looks like when we demand equity, justice, and recognition of our own humanity. It examines the mental and emotional costs of activism but also gives us a reason to stay in the fight. I could not put it down.
—Kalynn Bayron, author of Cinderella Is Dead

Candace Buford has been an avid reader since childhood—always looking for stories with strong and complex POCs. She graduated from Duke University with a degree in German Literature, which exposed her to the delightfully creepy side of storytelling by writers like Kafka and Brecht. She also holds a law degree from Penn State Law School and a business degree from Duke’s Fuqua School of Business. Raised in Houston, Candace currently lives in the heart of Seattle, where you can find her huddled in café corners, scribbling away in her notebook. She shares her life with a rocket scientist and a Plott Hound, who both ensure there is never a dull day. Kneel is her debut novel. (Photo credit: Clementine Cayrole)

Martha Brockenbrough (rhymes with broken toe) is the author of two books for adults and numerous books for young readers (with several others on the way), including YA fiction and nonfiction, picture books, and a forthcoming chapter book series. A faculty member at Vermont College of Fine Arts, she's also the founder of National Grammar Day (every March 4), and she's written game questions for Cranium and Trivial Pursuit. The former editor of MSN.com, Martha has interviewed lots of celebrities, including the Jonas Brothers and Slash. Her work has been published in a variety of places, including The New York Times. She also wrote an educational humor column for the online encyclopedia Encarta for nine years. She lives in Seattle with her family. Her favorite kind of food is Indian, although Thai runs a close second. Besides writing, she likes board games, playing music with the family band, travel to places far and near, drinking lots of coffee, and working out really hard at the gym.