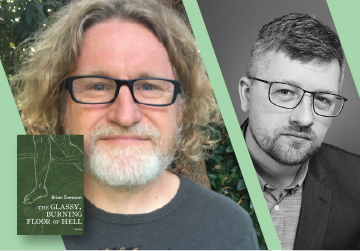 Third Place Books welcomes literary horror icon and translator Brian Evenson for a discussion of his latest collection of stories, The Glassy, Burning Floor of Hell (Coffee House Press). He will be joined in conversation by Lincoln Michel, author of Upright Beasts and the forthcoming novel, The Body Scout.

About The Glassy, Burning Floor of Hell. . .

“Here is how monstrous humans are.”

A sentient, murderous prosthetic leg; shadowy creatures lurking behind a shimmering wall; brutal barrow men—of all the terrors that populate The Glassy, Burning Floor of Hell, perhaps the most alarming are the beings who decimated the habitable Earth: humans. In this new short story collection, Brian Evenson envisions a chilling future beyond the Anthropocene that forces excruciating decisions about survival and self-sacrifice in the face of toxic air and a natural world torn between revenge and regeneration. Combining psychological and ecological horror, each tale thrums with Evenson’s award-winning literary craftsmanship, dark humor, and thrilling suspense.

Praise for The Glassy, Burning Floor of Hell. . .

“[A] towering collection of nightmarish horror, sci-fi parables, and weird tales. . . . ‘Once I take you there,’ ends another story, ‘you'll have a hard time dragging yourself away.’ The same could be said of Evenson's unforgettable work, drawn from the darkest corners of the imagination and nearly impossible to forget.”
—Publisher's Weekly, starred review

“Evenson is one of our greatest contemporary writers of literary horror; I'm always psyched—and a little afraid—when he has a new book out.”
—Emily Temple, Literary Hub

“Literary horror at its most existential, visceral, and wonderful. These strange stories build upon each other to create an uncanny shadow universe rich, vivid and shimmering with every kind of terror. Another brilliant collection.”
—Mona Awad, author of All's Well

“Like with Borges or Kafka, every one of Brian Evenson’s stories are a whole world distilled down to a few pages, and rendered in a pointillism that feels not just abstract, but cosmic, yet is gritty all the same, and leaves a distinct, bloody residue in your mind, in your heart. And then you can no longer look at the world the way you used to.”
—Stephen Graham Jones, author of The Only Good Indian

Brian Evenson is the author of over a dozen works of fiction. He has received three O. Henry Prizes for his fiction. His most recent book, Song for the Unraveling of the World, won a Shirley Jackson Award and was a finalist for both the Los Angeles Times Ray Bradbury Prize for Science Fiction, Fantasy, and Speculative Fiction and the Balcones Fiction Prize. He lives in Los Angeles and teaches at CalArts.

Lincoln Michel is the author of the short story collection Upright Beasts and the coeditor of the anthologies Tiny Crimes and Tiny Nightmares. His fiction appears or is forthcoming in the Paris Review, F&SF, Granta, Lightspeed, the Pushcart Prize anthology, and elsewhere. His debut novel, The Body Scout, will be released by Orbit on September 21st. You can find him online at lincolnmichel.com and @thelincoln.