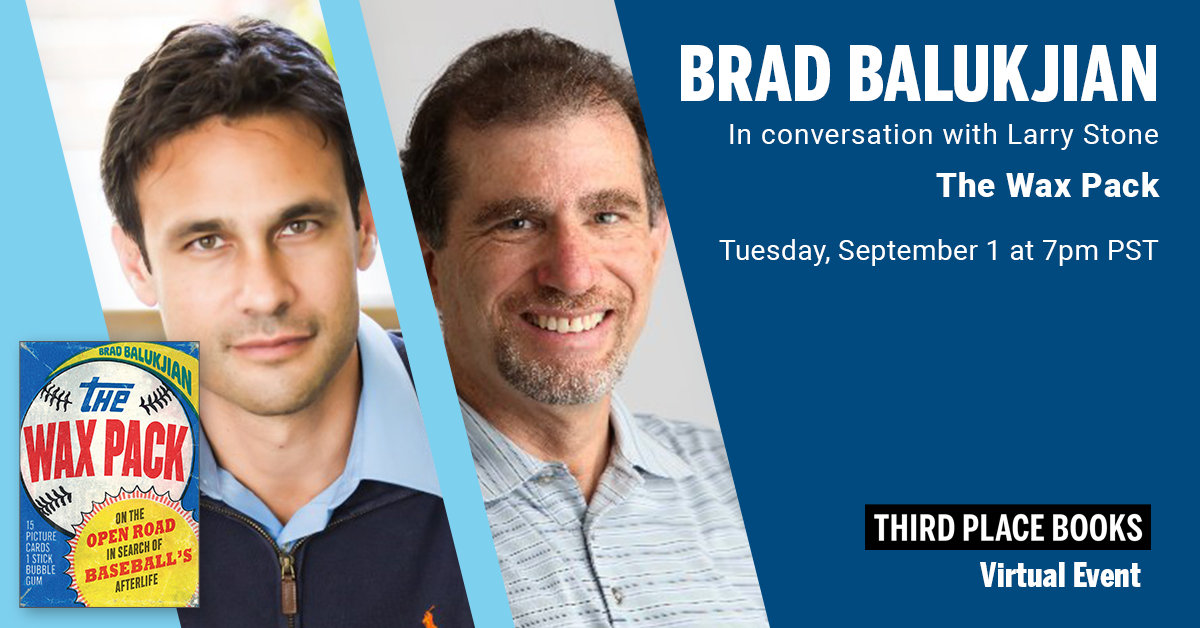 This is a virtual event!
Register for this Livestream Event Here!
https://www.crowdcast.io/e/tpb_balukjian_stone

Part baseball nostalgia and part road trip travelogue, The Wax Pack follows Brad Balukjian as he tracks down players from a single pack of baseball cards from 1986 that had remained sealed for almost thirty years.

Is there life after baseball? Starting from this simple question, The Wax Pack ends up with something much bigger and unexpected--a meditation on the loss of innocence and the gift of impermanence, for both Brad Balukjian and the former ballplayers he tracked down. To get a truly random sample of players, Balukjian followed this wildly absurd but fun-as-hell premise: he took a single pack of baseball cards from 1986 (the first year he collected cards), opened it, chewed the nearly thirty-year-old gum inside, gagged, and then embarked on a quest to find all the players in the pack. Absurd, maybe, but true. He took this trip solo in the summer of 2015, spanning 11,341 miles through thirty states in forty-eight days.

Balukjian actively engaged with his subjects--taking a hitting lesson from Rance Mulliniks, watching kung fu movies with Garry Templeton, and going to the zoo with Don Carman. In the process of finding all the players but one, he discovered an astonishing range of experiences and untold stories in their post-baseball lives, and he realized that we all have more in common with ballplayers than we think. While crisscrossing the country, Balukjian retraced his own past, reconnecting with lost loves and coming to terms with his lifelong battle with obsessive-compulsive disorder.

Alternately elegiac and uplifting, The Wax Pack is part baseball nostalgia, part road trip travelogue, and all heart, a reminder that greatness is not found in the stats on the backs of baseball cards but in the personal stories of the men on the front of them.

Brad Balukjian is director of the Natural History and Sustainability Program and teaches biology at Merritt College in Oakland, California. He is also a freelance writer and has published articles in Rolling Stone, the Los Angeles Times, National Geographic, Slate, Discover, Smithsonian, Natural History, NOVA Next, and Islands.

Larry Stone is a sports columnist for the Seattle Times, where he has covered the Mariners for more than two decades. He is the co-author of Edgar: An Autobiography now available in paperback.