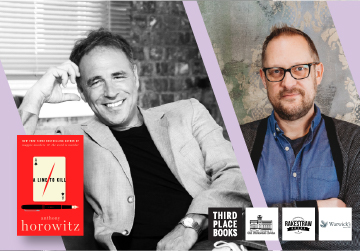 Third Place Books, Warwick's, Rakestraw Books, and Old Firehouse Books are honored to present a virtual event with Anthony Horowitz—author of The Magpie Murders, Moonflower Murders, and the Alex Rider series for young adults—for a thrilling presentation of his latest novel, A Line to Kill. He will be joined in conversation by Peter Swanson, author of Before She Knew Him, Eight Perfect Murders, and, most recently, Every Vow You Break.

Tickets are required for this event. All tickets include a copy of A Line To Kill shipped to the address you provide. Please note: Third Place Books CANNOT offer international shipping at this time.

The New York Times bestselling author of the brilliantly inventive The Word Is Murder and The Sentence Is Death returns with his third literary whodunit featuring intrepid detectives Hawthorne and Horowitz.

When Ex-Detective Inspector Daniel Hawthorne and his sidekick, author Anthony Horowitz, are invited to an exclusive literary festival on Alderney, an idyllic island off the south coast of England, they don’t expect to find themselves in the middle of murder investigation—or to be trapped with a cold-blooded killer in a remote place with a murky, haunted past.

Arriving on Alderney, Hawthorne and Horowitz soon meet the festival’s other guests—an eccentric gathering that includes a bestselling children’s author, a French poet, a TV chef turned cookbook author, a blind psychic, and a war historian—along with a group of ornery locals embroiled in an escalating feud over a disruptive power line. When a local grandee is found dead under mysterious circumstances, Hawthorne and Horowitz become embroiled in the case. The island is locked down, no one is allowed on or off, and it soon becomes horribly clear that a murderer lurks in their midst. But who?

Both a brilliant satire on the world of books and writers and an immensely enjoyable locked-room mystery, A Line to Kill is a triumph—a riddle of a story full of brilliant misdirection, beautifully set-out clues, and diabolically clever denouements.

"An effortless blend of humor and fair play. . . the often prickly relationship between the Watson-like Horowitz and the Holmes-like Hawthorne complements the intricate detective work worthy of a classic golden age whodunit."
—Publishers Weekly (starred review)

"Horowitz is a master of misdirection, and his brilliant self-portrayal, wittily self-deprecating, carries the reader through a jolly satire on the publishing world."
—Booklist

"The most conventional of Horowitz’s mysteries to date still reads like a golden-age whodunit on steroids."
—Kirkus Reviews

One of the UK’s most prolific and successful writers, Anthony Horowitz may have committed more (fictional) murders than any other living author. Two of his previous novels, Magpie Murders and Moonflower Murders, were instant NYT bestsellers. His novel Trigger Mortis (2015) contained original material from Ian Fleming. His most recent Sherlock Holmes novel, Moriarty, is already an industry sensation; its predecessor, The House of Silk, has sold over 450,000 copies worldwide in more than 35 countries. His bestselling Alex Rider series for Young Adults has sold more than 19 million copies worldwide. As a TV screenwriter he created both Midsomer Murders and the BAFTA-winning Foyle’s War on PBS; other TV work includes Poirot and the widely acclaimed mini-series Collision and Injustice. Anthony regularly contributes to a wide variety of national newspapers and magazines, and in January 2014 was awarded an OBE for his services to literature. He lives in London.

Peter Swanson is the author of eight novels, including The Kind Worth Killing, winner of the New England Society Book Award, and finalist for the CWA Ian Fleming Steel Dagger; Her Every Fear, an NPR book of the year; Before She Knew Him; Eight Perfect Murders; and his most recent, Every Vow You Break. His books have been translated into 30 languages, and his stories, poetry, and features have appeared in Asimov’s Science Fiction, The Atlantic Monthly, Measure, The Guardian, The Strand Magazine, and Yankee Magazine. He lives outside of Boston, where he is at work on his next novel, Nine Lives, out in March 2022.