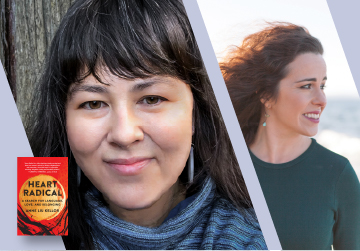 Third Place Books is honored to host Anne Liu Kellor for the release of her debut memoir, Heart Radical: A Search for Language, Love, and Belonging. She will be joined in conversation by Kristen Millares Young, author of the critically-acclaimed novel Subduction.

Wanting to understand how her path is tied to her mother tongue, Anne, a young, multiracial American woman, travels through China, the country of her mother’s birth. Along the way, she tries on different roles—seeker, teacher, student, girlfriend, artist, and daughter—and continually asks herself: Why do I feel called to make this journey?

Whether witnessing a Tibetan sky burial, teaching English at a university in Chengdu, visiting her grandmother in LA, or falling in love with a Chinese painter, Anne is always in pursuit of intimacy with others, even as she is all too aware of her silences and separation. Ultimately, Anne realizes that to live her truth as a mixed-race, bilingual woman she must embrace all of her influences and layers. In a world that often wants us to choose a side or fit an ideal, she learns that she can both belong and not belong wherever she is, and that home is found within.

“Heart Radical is a richly absorbing, deeply moving book about one woman’s search for identity, enlightenment, and connection. It’s also a tender travel memoir that takes the reader on an unforgettable and intimate journey with the author as she grapples with being a twentysomething American in China—the country from which her mother immigrated. I loved this book. It’s vulnerable, searching, insightful, riveting and beautifully written.”
—Cheryl Strayed, author of Wild

“Traversing two countries across two decades, Heart Radical gets at the multiple meanings of the heart in word, in practice, in physical and emotional use and evolution. Vivid with sensory experiences, this book offers us the chance to travel not just with Kellor but also within our own interior landscapes to arrive at new and deeper ways of connecting to our hearts’ most fervent and secret wishes.”
—Khadijah Queen, author of I’m So Fine

“Anne Liu Kellor's intimate and revealing memoir Heart Radical concerns a struggle to know oneself—and to get into the heart of the Chinese people through language.”
—Foreword Reviews (starred)

Born and raised in Seattle, Anne Liu Kellor is a mixed-race Chinese American writer, editor, and teacher. Her essays have appeared in Longreads, Fourth Genre, Witness, New England Review, The Normal School, Literary Mama, and many more. Anne earned her MFA from Antioch University Los Angeles, and is the recipient of fellowships from Hedgebrook, Seventh Wave, Jack Straw Writers Program, 4Culture, and Hypatia-in-the-Woods. She teaches writing workshops across the Pacific Northwest and loves to support women writers in finding their voice and community. Praised by Cheryl Strayed as "insightful, riveting, and beautifully written," Heart Radical: A Search for Language, Love, and Longing is her first book.

Kristen Millares Young is the author of the novel Subduction, a Paris Review staff pick called “whip-smart” by the Washington Post and “a brilliant debut” by the Seattle Times. Shortlisted for the VCU Cabell First Novelist Award, Subduction won silver Nautilus and IPPY awards and was a finalist for a Foreword Indies Book of the Year Award and two International Latino Book Awards. The editor of Seismic, Kristen was the 2018-2020 Prose Writer-in-Residence at Hugo House. Her essays, reviews and investigations appear most recently in the Washington Post, The Rumpus, PANK Magazine, Literary Hub, the Guardian, and the anthologies Alone Together and Advanced Creative Nonfiction. Kristen was the researcher for the New York Times team that produced “Snow Fall,” which won a Pulitzer Prize.