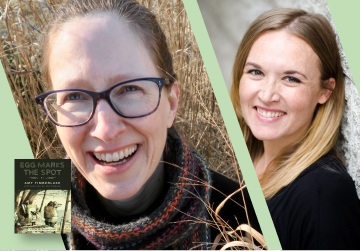 Third Place Books welcomes Newbery Honor winner Amy Timberlake for the sequel to her beloved Skunk and Badger series, Egg Marks the Spot, illustrated by Jon Klassen. Amy will be joined in conversation by Liesl Shurtliff, bestselling author of Rump: The (Fairly) True Tale of Rumpelstiltskin and other books in the (Fairly) True Tales series.

Buried in the heart of every animal is a secret treasure. Badger’s is the Spider Eye Agate, stolen years ago by his crafty and treasure-trade-dealing cousin, Fisher. Skunk’s is Sundays with the New Yak Times Book Review.

When Mr. G. Hedgehog threatens to take the Book Review as soon as it thumps on the doorstep, Skunk decides an adventure (“X Marks the Spot!”) will solve both their problems. Badger agrees, and together they set off for his favorite campsite on Endless Lake. But all is not as it seems at Campsite #5. Harrumphs in the night. Unexpected friends.

Then Fisher appears, and Badger knows something is up.

Something involving secrets, betrayals, and lies.

And a luminous, late-Jurassic prize.

In a volume that includes full-color plates and additional black-and-white illustrations by Caldecott medalist Jon Klassen, Newbery Honor author Amy Timberlake takes readers on a second adventure in the new series reviewers have called an instant classic, with comparisons to Frog and Toad, Winnie-the-Pooh, and The Wind in the Willows.

Praise for Egg Marks the Spot. . .

“Leaning heavily on its delightfully whimsical qualities, Book 2 of Timberlake and Klassen’s endearing series also boasts a whole lot of heart, perhaps even more so than its predecessor. Even as its often fantastical premise careens over the edge (and thrillingly so), the series’ titular duo keep it grounded thanks to Timberlake’s clear admiration for these characters and their quirks. Klassen’s artwork, meanwhile, continues to awe with its wistfulness. As wonderful as Important Rock Work.”
—Kirkus Reviews, starred review

“Author Amy Timberlake has such a fun franchise going with the Skunk and Badger books . . . Clever, smart, and laugh-out-loud funny and exciting at the same time. Her writing is terrific, and the story is compelling. The illustrations by Jon Klassen have just the right sense of fun to them to accompany this terrific story. It’s a good one!”
—Seattle Book Review

Amy Timberlake’s novels for young readers have received a Newbery Honor, an Edgar Award, a Golden Kite Award, and the China Times Best Book Award. She grew up in Hudson, Wisconsin, but now calls Chicago home. She is a graduate of Mount Holyoke College, and holds an MA in English and Creative Writing from the University of Illinois. You can find her walking on Chicago’s Lakefront Trail on cool, crisp fall days. (Photo credit: Phil Timberlake)

Liesl Shurtliff is the New York Times bestselling author of Rump: The (Fairly) True Tale of Rumpelstiltskin and other books in the (Fairly) True Tales series and the Time Castaways series. Her books have been named to several state award lists and have won many awards including a Children’s Book Award from the International Literacy Association. A native of Salt Lake City, Utah, Liesl has called Chicago home for seventeen years. She and her husband have four children who have inspired many characters in Liesl’s books, both hero and villain.