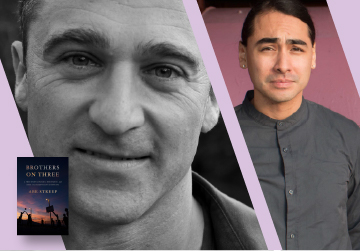 Third Place Books welcomes award-winning journalist Abe Streep for a discussion of his debut book of narrative nonfiction, Brothers on Three: A True Story of Family, Resistance, and Hope on a Reservation in Montana. He'll be joined in conversation by Julian Brave NoiseCat (Secwepemc/St'at'imc), columnist for Canada's National Observer and contributing editor with Canadian Geographic.

Watch the book trailer for Brothers on Three.

About Brothers on Three. . .

From journalist Abe Streep, the story of coming of age on a reservation in the American West and a team uniting a community

March 11, 2017, was a night to remember: in front of the hopeful eyes of thousands of friends, family members, and fans, the Arlee Warriors would finally bring the high school basketball state championship title home to the Flathead Indian Reservation. The game would become the stuff of legend, with the boys revered as local heroes. The team’s place in Montana history was now cemented, but for starters Will Mesteth, Jr. and Phillip Malatare, life would keep moving on—senior year was only just beginning.

In Brothers on Three, we follow Phil and Will, along with their teammates, coaches, and families, as they balance the pressures of adolescence, shoulder the dreams of their community, and chart their own individual courses for the future.

Brothers on Three is not simply a story about high school basketball, about state championships and a winning team. It is a book about community, and it is about boys on the cusp of adulthood, finding their way through the intersecting worlds they inhabit and forging their own paths to personhood.

Praise for Brothers on Three. . .

"Occasionally a sports team can reflect a community in all its complexity and beauty. The Arlee Warriors played with enormous grace under pressure, and this superb book—by being honest, real, and reflective—mirrors and honors that strength. You will not soon forget it."
—Bill McKibben, author of Falter

"Meticulously-reported and exquisitely-written, Abe Streep's Brothers On Three is a masterwork of immersive journalism. Streep's integrity as a journalist and as a human shines through on every page."
—Eliza Griswold, Pulitzer Prize winning author of Amity and Prosperity

Abe Streep has written for The New York Times Magazine, The New Yorker, Outside, The California Sunday Magazine, WIRED, and Harper's. His writing has been anthologized in Best American Sports Writing and noted by Best American Essays and a Best American Science and Nature Writing. He is a recipient of the 2019 American Mosaic Journalism Prize for deep reporting on underrepresented communities. Author photo credit: Stephanie Joyce

Julian Brave NoiseCat (Secwepemc/St'at'imc) is a fellow of New America and the Type Media Center. A columnist for Canada's National Observer and contributing editor with Canadian Geographic, his work has appeared in The New York Times, The Washington Post and The New Yorker among other publications. He's currently working on a book, tentatively titled We Survived the Night, about Indigenous peoples in the United States and Canada, for Alfred A. Knopf.