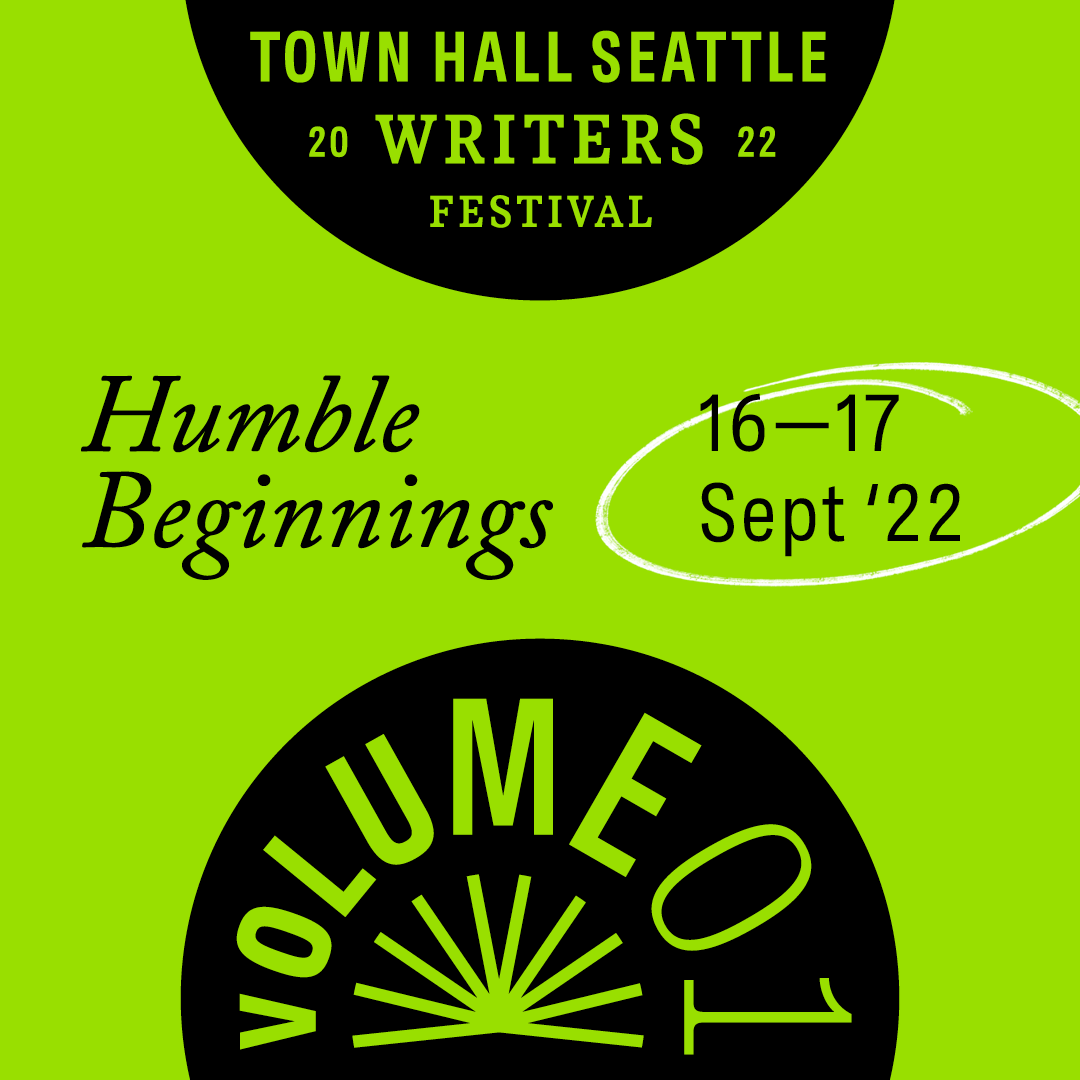 This is an in-person event presented by Town Hall Seattle. Purchase tickets at townhallseattle.org

Third Place Books is thrilled to partner with Town Hall Seattle for the launch of a new annual Writers Festival Volume 1: Humble Beginnings, an immersive event with nine guest authors who will join a roomful of readers for a day and a night of talks, interviews, discussions, and signings. Purchase tickets here.

Seattle’s vibrant literary culture is an essential dimension of our civic identity. Town Hall Seattle announces the launch of its first annual Writers Festival - Volume 1: Humble Beginnings. Celebrating Seattle’s devotion to the written word, this exhilarating 2-day series runs Friday, September 16th and Saturday, September 17th at Town Hall’s historic building in First Hill. The pandemic created space for many to read in solitude; but now it’s time to gather and celebrate our City of Literature with convening and conversation. Join us for a day and a night of talks, book signings, community organizations, and more. Food will be available for purchase.

Friday and Two-Day Passes include a copy of Siddhartha Mukherjee’s The Song of the Cell. Book will be mailed to patrons after the book release on 10/25/22. Books will be shipped within the Continental US only.

Siddhartha Mukherjee is the author of The Gene: An Intimate History, a #1 New York Times bestseller and The Emperor of All Maladies: A Biography of Cancer, winner of the 2011 Pulitzer Prize in general nonfiction. Both titles were made into multi-part PBS documentaries produced by Ken Burns. Mukherjee also wrote The Laws of Medicine: Field Notes from an Uncertain Science and was the editor of Best Science Writing 2013. Mukherjee is an associate professor of medicine at Columbia University and a cancer physician and researcher. A Rhodes scholar, he graduated from Stanford University, University of Oxford, and Harvard Medical School. He has published articles in many journals, including Nature, The New York Journal of Medicine, Cell, The New York Times Magazine, and The New Yorker. He lives in New York with his wife and daughters.

Lan Samantha Chang is the author of the acclaimed novels All Is Forgotten, Nothing Is Lost and Inheritance, as well a story collection, Hunger. Her short stories have appeared in The Atlantic Monthly, Ploughshares, and The Best American Short Stories. She has received fellowships from the National Endowment for the Arts, Stanford University, the Ratcliffe Institute for Advanced Study, the John Simon Guggenheim Foundation, and the American Academy in Berlin. Chang is the director of the University of Iowa Writers’ Workshop, where she is the first woman and Asian American to hold the position. She lives with her husband and daughter in Iowa City, Iowa.

A.M. Homes is the recipient of numerous literary awards including the Women’s Prize for Fiction for her novel May We Be Forgiven. She is the author of 13 books, among them the best-selling memoir, The Mistress’ Daughter; the novels This Book Will Save Your Life, The End of Alice, In A Country Of Mothers and Jack; the short story collections, Days of Awe, Things You Should Know and The Safety of Objects; and the travel memoir, Los Angeles: People, Places and The Castle On The Hill. Her work has been translated into twenty-two languages and appears frequently in Artforum, Harpers, Granta, McSweeney’s, The New Yorker, The New York Times, and Zoetrope. She also writes for film and television and teaches in the Creative Writing Program at Princeton University.

David Quammen’s sixteen previous books include The Tangled Tree, The Song of the Dodo, The Reluctant Mr. Darwin, and Spillover, a finalist for the National Book Critics Circle Award and recipient of the Premio Letterario Merck, in Rome. He has written for The New Yorker, Harper’s Magazine, The Atlantic, National Geographic, and Outside, among other magazines, and is a three-time winner of the National Magazine Award. Quammen has received honorary doctorates from Montana State University and Colorado College. He shares a home in Bozeman, Montana, with his wife, Betsy Gaines Quammen, author of American Zion, and with two Russian wolfhounds, a cross-eyed cat, and a rescue python.

Oscar Hokeah is a Native American writer of literary fiction. He holds an M.A. in English from the University of Oklahoma, with a concentration in Native American Literature and a B.F.A. in Creative Writing from the Institute of American Indian Arts, with a minor in Indigenous Liberal Studies. He is a recipient of the Truman Capote Scholarship Award and winner of the Native Writer Award through the Taos Summer Writers Conference. His writing can be found in World Literature Today, American Short Fiction, South Dakota Review, Yellow Medicine Review, Surreal South, and Red Ink Magazine. Hokeah is a citizen of Cherokee Nation and the Kiowa Tribe of Oklahoma on his mother’s side, and he has Mexican heritage through his father. He currently lives in his hometown of Tahlequah, Oklahoma, in the heart of Cherokee Nation.

Leila Mottley is a New York Times bestselling author with an interest in reflecting on institutional and individual inequity, liberation, and joy through writing. Her debut novel, Nightcrawling, was selected as an Oprah’s Book Club pick (the youngest writer ever selected). She was named a New York Times Writer to Watch in spring of 2022, and her work has been published in Oprah Daily and The New York Times. Leila was also the 2018 Oakland Youth Poet Laureate in Oakland, California, where she was born, raised, and resides today.

Joyce Carol Oates is a recipient of the National Humanities Medal, the National Book Critics Circle Ivan Sandrof Lifetime Achievement Award, the National Book Award, and the 2019 Jerusalem Prize for Lifetime Achievement, and has been nominated several times for the Pulitzer Prize. She has written some of the most enduring fiction of our time, including the national best sellers We Were the Mulvaneys; Blonde; and the New York Times Bestseller The Falls, which won the 2005 Prix Femina. In 2020 she was awarded the Cino Del Duca World Prize for Literature. She is the Roger S. Berlind ’52 Distinguished Professor of the Humanities emerita at Princeton University and has been a member of the American Academy of Arts and Letters since 1978.

Ted Chiang’s fiction has won four Hugo, four Nebula, and four Locus Awards, and has been featured in The Best American Short Stories. His debut collection, Stories of Your Life and Others, has been translated into twenty-one languages. He was born in Port Jefferson, New York, and currently lives near Seattle, Washington.

Sloane Crosley is the author of the novel The Clasp and three essay collections: Look Alive Out There and the New York Times bestsellers I Was Told There’d Be Cake and How Did You Get This Number. She served as editor of The Best American Travel Writing series and is featured in The Library of America’s 50 Funniest American Writers, The Best American Nonrequired Reading, Phillip Lopate’s The Contemporary American Essay, and others. She was the inaugural columnist for The New York Times Op-Ed “Townies” series, a contributing editor at Interview Magazine, and a columnist for The Village Voice, Vanity Fair, The Independent, Black Book, Departures, and The New York Observer. A two-time finalist for the Thurber Prize for American Humor and a contributing editor at Vanity Fair, she lives in New York City.