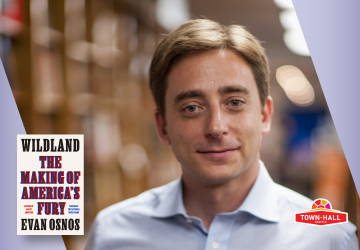 We are all connected. We are all far apart. This is our American reality as we all become more and more polarized. Inequities of wealth, class, and culture are pulling us further away as we struggle to define what America is, was, and should be.

In Wildland, Evan Osnos focuses on three places he’s lived in the United States: Greenwich, Connecticut, where Wall Street tycoons gut the heartland’s economy for their own profit; Clarksburg, West Virginia, where opioid abuse is rampant and white identity politics take center stage; and Chicago, Illinois, where violence and poverty run deep. Bookended by the attacks of September 11, 2001, to the storming of the U.S. Capitol on January 6, 2021, Osnos examines the seismic changes in American politics and culture by focusing on the lives of everyday Americans in three cities across two decades. Much has changed. Much has stayed the same. This is our American reality.

After a decade abroad, the National Book Award– and Pulitzer Prize–winning writer Evan Osnos returns to three places he has lived in the United States—Greenwich, CT; Clarksburg, WV; and Chicago, IL—to illuminate the origins of America’s political fury.

Evan Osnos moved to Washington, D.C., in 2013 after a decade away from the United States, first reporting from the Middle East before becoming the Beijing bureau chief at the Chicago Tribune and then the China correspondent for The New Yorker. While abroad, he often found himself making a case for America, urging the citizens of Egypt, Iraq, or China to trust that even though America had made grave mistakes throughout its history, it aspired to some foundational moral commitments: the rule of law, the power of truth, the right of equal opportunity for all. But when he returned to the United States, he found each of these principles under assault.

In search of an explanation for the crisis that reached an unsettling crescendo in 2020—a year of pandemic, civil unrest, and political turmoil—he focused on three places he knew firsthand: Greenwich, Connecticut; Clarksburg, West Virginia; and Chicago, Illinois. Reported over the course of six years, Wildland follows ordinary individuals as they navigate the varied landscapes of twenty-first-century America. Through their powerful, often poignant stories, Osnos traces the sources of America’s political dissolution. He finds answers in the rightward shift of the financial elite in Greenwich, in the collapse of social infrastructure and possibility in Clarksburg, and in the compounded effects of segregation and violence in Chicago. The truth about the state of the nation may be found not in the slogans of political leaders but in the intricate details of individual lives, and in the hidden connections between them. As Wildland weaves in and out of these personal stories, events in Washington occasionally intrude, like flames licking up on the horizon.

A dramatic, prescient examination of seismic changes in American politics and culture, Wildland is the story of a crucible, a period bounded by two shocks to America’s psyche, two assaults on the country’s sense of itself: the attacks of September 11 in 2001 and the storming of the U.S. Capitol on January 6, 2021. Following the lives of everyday Americans in three cities and across two decades, Osnos illuminates the country in a startling light, revealing how we lost the moral confidence to see ourselves as larger than the sum of our parts.

Evan Osnos is a staff writer at The New Yorker, a CNN contributor, and a senior fellow at the Brookings Institution. Based in Washington D.C., he writes about politics and foreign affairs. He was the China Correspondent at The New Yorker from 2008 to 2013. His first book, Age of Ambition: Chasing Fortune, Truth, and Faith in the New China, won the 2014 National Book award and was a finalist for the Pulitzer Prize. In 2020, he published the international bestseller, Joe Biden: The Life, the Run, and What Matters Now, based on interviews with Biden, Barack Obama, and others. Prior to The New Yorker, Osnos worked as the Beijing bureau chief of the Chicago Tribune, where he contributed to a series that won the 2008 Pulitzer Prize for investigative reporting. Before his appointment in China, he worked in the Middle East, reporting mostly from Iraq. He and his wife, Sarabeth Berman, have two children.