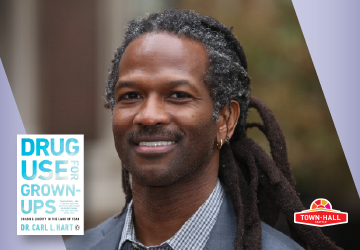 This virtual event is presented by Town Hall Seattle. Purchase tickets at townhallseattle.org.

Is it possible for drug use to be part of a responsible, balanced, and happy life? Dr. Carl L. Hart, a prominent neuroscientist and professor of psychology at Columbia University, believes so; but he didn’t always see it that way.

Dr. Hart grew up in Miami at a time when drugs like crack cocaine were blamed for his city’s problems. Initially, his research aimed to prove that drug use led to bad outcomes. But what he found was unexpected: the facts didn’t support the ideology, the truth was dismissed and distorted to keep fear and outrage stoked, and more Black and brown bodies ended up behind bars.

In his new book, Drug Use for Grown-Ups, Dr. Hart asserts that responsible drug use does more to enrich lives than to harm them. Based on personal experience and decades of research, he argues that criminalization and demonization of drug use — not the drugs themselves — are what caused negative outcomes and reinforced structural racism in America. Dr. Hart joins us at Town Hall for a timely reflection on America’s war on drugs, the unjust stigmas that persist, and how we might develop a new vision of drug use.

From one of the world’s foremost experts on the subject, a powerful argument that the greatest damage from drugs flows from their being illegal, and a hopeful reckoning with the possibility of their use as part of a responsible and happy life

Dr. Carl L. Hart, Ziff Professor at Columbia University and former chair of the Department of Psychology, is one of the world’s preeminent experts on the effects of so-called recreational drugs on the human mind and body. Dr. Hart is open about the fact that he uses drugs himself, in a happy balance with the rest of his full and productive life as a colleague, husband, father, and friend. In Drug Use for Grown-Ups, he draws on decades of research and his own personal experience to argue definitively that the criminalization and demonization of drug use—not drugs themselves—have been a tremendous scourge on America, not least in reinforcing this country’s enduring structural racism.

From inside the massively well-funded research arm of the American war on drugs, Hart saw how the facts did not support the ideology. The truth was dismissed and distorted in order to keep fear and outrage stoked, the funds rolling in, and Black and brown bodies behind bars. Drug Use for Grown-Ups offers a radically new vision: when used responsibly, drugs can enrich and enhance our lives. We have a long way to go, but this book is an extraordinarily important step.

Carl Hart is the Ziff Professor of Psychology in the Departments of Psychology and Psychiatry at Columbia University. He is also a Research Scientist at the New York State Psychiatric Institute. Dr. Hart has published numerous scientific and popular articles in the area of neuropsychopharmacology and is co-author of the textbook Drugs, Society and Human Behavior. His book High Price was the 2014 winner of the PEN/E.O. Wilson Literary Science Writing Award.