Town Hall Seattle Livestream: Lee McIntyre — How to Talk to a Science Denier 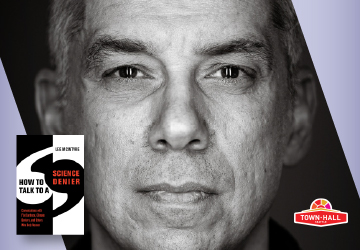 We’re not to blame for climate change. It’s a part of the natural cycle. The earth is flat. The round Earth conspiracy is orchestrated by NASA and other government agencies. No one should get the coronavirus vaccine. Bill Gates wants to use it to implant microchips in people. This is, of course, all bunk. But how can we change the minds of people who believe it to be true?

Lee McIntyre offers thoughts and suggestions to try and reach, communicate, and change the minds of science deniers in How to Talk to a Science Denier. And, he warns, it’s best not to just dismiss them and ignore them. Why? Science denial can kill. From attending a flat earth conference to chats with anti-vaxxers, McIntire lays out the five factors involved in science denial: cherry-picking evidence, belief in conspiracy theories, reliance on fake experts, logical errors, and setting impossible expectations on what science can achieve. Can we achieve understanding with the irrational? Not through belittling them or through anger, McIntyre says, but through calm, respectful rationality.

About How to Talk to a Science Denier. . .

In the beginning there was a bit. And then the pixel: a particular packaging of those bits. With the coming of the pixel, the organizing principle of most all modern media. Nearly every picture in the world is now composed of pixels: cell phone photos and Mars Rover transmissions, book illustrations and video games. Pixels and digital images are now all but synonymous.

Pixar cofounder Alvy Ray Smith offers in his new book, A Biography of the Pixel, simple but profound ideas that unify the dazzling varieties of digital image making. Pixel’s development begins with Fourier waves, proceeds through Turing machines, and ends with the first digital movies from Pixar, DreamWorks, and Blue Sky. Don’t know what a Fourier wave is? Don’t have a clue what a Turing machine does? Smith makes hard-to-understand concepts accessible to the layperson. Every field has now been touched by the small and mighty pixel – from the arts to technology; from business to entertainment. Smith opens our eyes to show how pictures composed of invisible stuff become visible.

Lee McIntyre is a Research Fellow at the Center for Philosophy and History of Science at Boston University. He is the author of Dark Ages: The Case for a Science of Human Behavior, Post-Truth, and The Scientific Attitude: Defending Science from Denial, Fraud, and Pseudoscience.