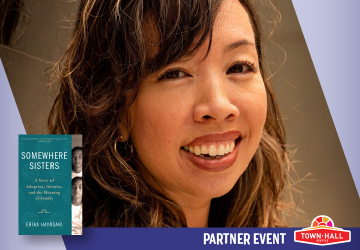 Town Hall Seattle presents Erika Hayasaki for a presentation of her book Somewhere Sisters: A Story of Adoption, Identity, and the Meaning of Family.

Imagine having an identical twin on the other side of the world—one you had no idea existed. That was the reality for sisters Isabella and Hà, born in Việt Nam but adopted and raised separately across the globe. One sister remained in a rural Vietnamese village that often went without electricity; the other grew up with a wealthy white family in the American suburbs. Their respective upbringings were worlds apart, both geographically and otherwise. The pair were reunited in their teenage years in a highly anticipated, but fraught meeting.

After learning about Isabella and Hà, award-winning journalist and UC Irvine professor Erika Hayasaki began interviewing the sisters, as well as their biological and adoptive families, in 2016. Hayasaki traced the girls’ diverging childhoods all the way to their reunion and the complicated years that followed.

Hayasaki’s qualitative research now culminates in a richly textured story, Somewhere Sisters: A Story of Adoption, Identity, and the Meaning of Family. The book presents Hà’s and Isabella’s stories from their perspectives, exploring complex topics including transnational and transracial adoption, class, Asian and Asian-American identity, nature vs. nurture, and sisterhood. Somewhere Sisters is at once a compelling and intimate account of forging one’s own identity as well as a meditation on the meaning of family and belonging.

Erika Hayasaki teaches in the Literary Journalism Program at the University of California, Irvine. She is a journalist interested in the intersections of identity, race, psychology, inequality, science, technology, history, and the human condition. Her stories have appeared in The New York Times Magazine, Wired, The Atlantic, Marie Claire, MIT Technology Review, Slate, and many others. She is a former New York-based national correspondent for the Los Angeles Times, where she spent nine years covering breaking news and writing feature stories.

She is the recipient of several fellowships, and her award-winning science writing has been featured in Longform’s Best of Science writing of 2016 and 2017, and notably selected in the Best American Science and Nature Writing 2019. Her previous book, The Death Class: A True Story About Life, was published in 2014.