Tilar J. Mazzeo presents 'Sisters in Resistance: How a German Spy, a Banker's Wife, and Mussolini's Daughter Outwitted the Nazis' 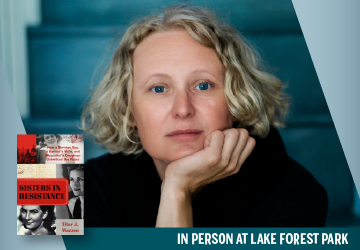 In a tale as twisted as any spy thriller, discover how three women delivered critical evidence of Axis war crimes to Allied forces during World War II: “A tantalizingly novelistic history lesson" (Kirkus).

Third Place Books welcomes scholar Tilar J. Mazzeo to our Lake Forest Park store! Mazzeo will be discussing her latest work of narrative nonfiction, Sisters in Resistance: How a German Spy, a Banker's Wife, and Mussolini's Daughter Outwitted the Nazis. This event is free and open to the public. Registration is required in advance.

Copies of Sisters in Resistance will be available for purchase at the store. This event will include a public signing and time for audience Q&A. Sustain our author series by purchasing a copy of the featured book!

About Sisters in Resistance. . .

In 1944, news of secret diaries kept by Italy's Foreign Minister, Galeazzo Ciano, had permeated public consciousness. What wasn't reported, however, was how three women—a Fascist's daughter, a German spy, and an American banker’s wife—risked their lives to ensure the diaries would reach the Allies, who would later use them as evidence against the Nazis at Nuremberg.

In 1944, Benito Mussolini's daughter, Edda, gave Hitler and her father an ultimatum: release her husband, Galeazzo Ciano, from prison, or risk her leaking her husband's journals to the press. To avoid the peril of exposing Nazi lies, Hitler and Mussolini hunted for the diaries for months, determined to destroy them.

Hilde Beetz, a German spy, was deployed to seduce Ciano to learn the diaries' location and take them from Edda. As the seducer became the seduced, Hilde converted as a double agent, joining forces with Edda to save Ciano from execution. When this failed, Edda fled to Switzerland with Hilde’s daring assistance to keep Ciano's final wish: to see the diaries published for use by the Allies. When American spymaster Allen Dulles learned of Edda's escape, he sent in Frances De Chollet, an “accidental” spy, telling her to find Edda, gain her trust, and, crucially, hand the diaries over to the Americans. Together, they succeeded in preserving one of the most important documents of WWII.

Drawing from in‑depth research and first-person interviews with people who witnessed these events, Mazzeo gives readers a riveting look into this little‑known moment in history and shows how, without Edda, Hilde, and Frances's involvement, certain convictions at Nuremberg would never have been possible.

Praise for Sisters in Resistance . .

"Intelligent and compelling, Mazzeo’s probing book delves intriguingly into the “moral thicket” into which a group of strangers found themselves plunged during the long, dark days of World War II. A tantalizingly novelistic history lesson."
—Kirkus

“An important, often harrowing, and until now little-known story of the Holocaust: how thousands of children were rescued from the Warsaw ghetto by a Polish woman of extraordinary daring and moral courage.”a
—Joseph Kanon, Author of Leaving Berlin, Praise for Irena’s Children

“Mazzeo chronicles a ray of hope in desperate times in this compelling biography of a brave woman who refused to give up.”
—Kirkus Reviews, Praise for Irena's Children

Tilar J. Mazzeo is Professeure Associée at University of Montreal, the former Clara C. Piper Associate Professor of English at Colby College, and the author of numerous works of narrative nonfiction including The Widow Clicquot and The Hotel on Place Vendome. Her books have been New York Times, San Francisco Chronicle, and Los Angeles Times bestsellers. (Photo credit: Janis Jean)