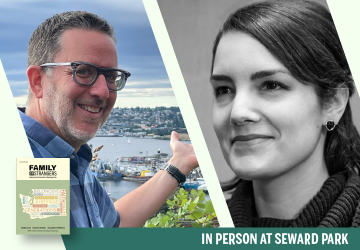 Third Place Books is pleased to welcome writer Stuart Eskenazi to discuss Family of Strangers: Building Jewish Communities in Washington State. Eskenazi authored an update for the book's new second edition, spotlighting the past 50 years of Jewish history in our state. He will be in conversation with local journalist Emily Alhadeff.This event is presented in partnership with the Washington State Jewish Historical Society, The Cholent, and our wonderful partner restaurant, Muriel's All Day Eats, a kosher Jewish eatery.

Muriel's will be open for dinner service prior to the start of this event for anyone who wants to come early and dine off a special menu crafted from the WSJHS's cookbook Yesterday's Mavens, Today's Foodies: Traditions in Northwest Jewish Kitchens. Preorder your dinner here!

Copies of Family of Strangers will be available for purchase at the store. This event will include a public signing and time for audience Q&A. Sustain our author series by purchasing a copy of the featured book!

About Family of Strangers. . .

From early immigrants to recent transplants, Jews in Washington have made notable contributions to civic and cultural life in their local communities, state, nation, and world.

Family of Strangers—published originally in 2003 and authored by Molly Cone, Howard Droker, and Jacqueline Williams—draws on hundreds of newspaper articles, oral histories, and one-on-one interviews to provide the first comprehensive account of Jewish communities and people in Washington state. Jewish immigrants first arrived in the middle of the nineteenth century, followed by larger numbers during the open-door era that stretched to 1924. They included Ashkenazim from Central and Eastern Europe, and Sephardim from Turkey and Rhodes. Subsequent waves of immigration consisted of European Jews escaping the Nazis and, later, Soviet Jews fleeing persecution. Isolated from the large centers of American Jewish life, following different religious customs and speaking different languages, these immigrants initially found little in common beyond the fabric of Judaism. A family of strangers, they built vibrant Jewish communities across the state.

This second edition of Family of Strangers features a new epilogue that explores Jewish history in Washington state over the past several decades - an era characterized by growth, diversity, and geographic spread. Transplants migrated to Washington to work within the state's robust tech-based economy. Younger generations, feeling increasingly disconnected from their Jewish identity, searched for occasions to recall their history and honor their heritage. Jewish organizations and institutions responded, offering myriad opportunities for all Jews to engage and embrace their Jewishness, no matter how they might express it.

Strangers, perhaps. But connected as one family.

The second edition of this book was made possible by the support of 4Culture. Learn more at 4culture.org.

Stuart Eskenazi is a writer, editor and communications consultant who worked 25 years as a newspaper reporter, including at The Seattle Times. He has written and curated exhibits on behalf of the Washington State Jewish Historical Society, including “Shalom! Open for Business,” a tribute to Jewish merchants in Washington, presented at the Museum of History & Industry, and “Shalom! Sefarad,” an introduction to Seattle’s Sephardic Jewish community, which traveled throughout Spain. He lives in Seward Park.

Emily Alhadeff is the founder and editor of The Cholent, "Seattle's only Jewish newsletter." The inaugural editor of Jewish in Seattle magazine, she has been involved with community journalism and local Jewish life since she moved here in 2010. She lives in Seward Park with her family.