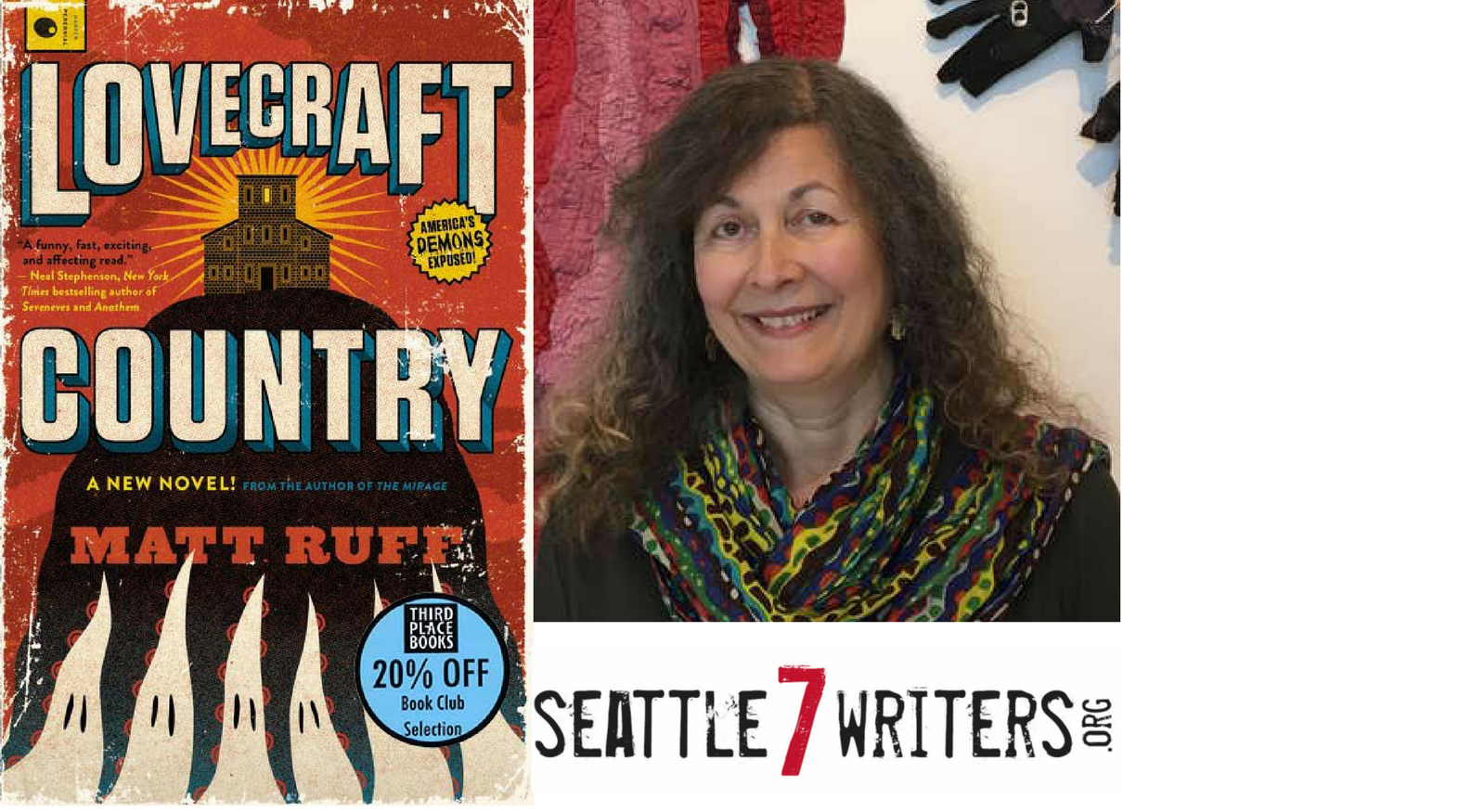 Join local author Kathleen Alcala for a discussion about her selection for this month, Lovecraft Country by Matt Ruff. Drink specials are available from Raconteur during book clubs and author readings, so grab a glass and join us for a lively literary discussion. Every month our selected titles are discounted 20% through the date of the book club. All are welcome, no purchase required.

The critically acclaimed cult novelist makes visceral the terrors of life in Jim Crow America in this brilliant and wondrous work of the imagination that melds historical fiction, pulp noir, and Lovecraftian horror and fantasy.

Chicago, 1954. When his father goes missing, 22-year-old Army veteran Atticus Turner embarks on a road trip to New England to find him, accompanied by his uncle George—publisher of The Safe Negro Travel Guide—and his childhood friend Letitia. On their journey to the manor of Samuel Braithwhite—heir to the estate that owned one of Atticus’s ancestors—they encounter both mundane terrors of white America and malevolent spirits that seem straight out of the weird tales George devours.

Atticus discovers his father in chains, held prisoner by a secret cabal, the Order of the Ancient Dawn—led by Braithwhite and his son Caleb—which has gathered to perform a ritual that shockingly centers on Atticus. And his one hope of salvation may be the seed of his—and the whole Turner clan’s—destruction.

A chimerical blend of magic, power, hope, and freedom that stretches across time, touching diverse members of two black families, Lovecraft Country is a devastating kaleidoscopic portrait of racism—the terrifying specter that still haunts us today.

Kathleen Alcalá is the author of a short story collection, three novels set in 19th Century Mexico and the Southwest, and a collection of essays based on family history. Her work has received the Western States Book Award, the Governor’s Writers Award, and a Pacific Northwest Booksellers Association Book Award. She received her second Artist Trust Fellowship in 2008, and was honored by the national Latino writers group, Con Tinta, at the Associated Writing Programs Conference in 2014. She has been designated an Island Treasure in the Arts. Kathleen's latest book is "The Deepest Roots: Finding Food and Community on a Pacific Northwest Island," by the University of Washington Press.

Kathleen has a B.A. in Linguistics from Stanford University, an M.A. in Creative Writing from the University of Washington, and a Master of Fine Arts from the University of New Orleans. Her work is often referred to as magic realism, but Kathleen considers most of it historical fiction. She does, however, have a great affinity for the story-telling techniques of magic realism and science fiction, and has been both a student and instructor in the Clarion West Science Fiction Workshop.

Kathleen was a faculty member at the Northwest Institute of Literary Arts on Whidbey Island until it closed in 2016. She still lectures and gives readings and workshops in creative writing.

Ursula K. LeGuin said of Kathleen's first collection, “This is a book of wonders. Each story unfolds with humor and simplicity and perfect naturalness into something original and totally unpredictable. The kingdom of Borges and García Marquez lie just over the horizon, but this landscape of desert towns and dreaming hearts … is Alcalá-land. It lies just across the border between Mexico and California, across the border between the living and the dead, across all the borders – a true new world.”

You can find out more about Kathleen and her books here.