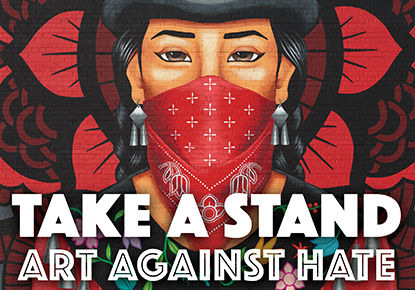 This is a virtual event, taking place via Seattle Public Library’s Crowdcast Channel! Register for this event here!

Join us to hear contributors from the anthology Take A Stand: Art Against Hate read their work and work by other authors.

Topics range from slave ships to ICE raids, from settler colonialism to drone strikes, from memories of trauma to dreams of a more just and peaceful society. As Diane Glancy writes in her foreword,  “These pieces are protest against violence, injustice, cruelty. They are resistance. They are inscription, instruction, witness, warning, remedy, solution, even solace.”

Founded in 1991, Raven Chronicles Press is a nonprofit publisher and literary organization committed to fostering literary community and showcasing the diverse voices and viewpoints that enrich our culture.

Anna Bálint (moderator) a Seattle-based poet, writer, editor, and longtime teacher of creative writing. Her editorial work for Raven Chronicles Press includes Take a Stand: Art Against Hate, and Words From the Café, an anthology of writing by people in recovery.

Tiffany Midge a member of the Standing Rock Sioux Nation and was raised by wolves in the Pacific Northwest. Her book Bury My Heart at Chuck E. Cheese's was a finalist for a Washington State Book Award, and selected for Spokane Is Reading.

Shankar Narayan is a 4Culture grant recipient for “Claiming Space,” a project to lift the voices of writers of color, and his chapbook, Postcards From the New World, won the Paper Nautilus Debut Series Chapbook Prize. In Seattle, he awakens to the wonders of Cascadia every day, but his heart yearns east to his other hometown, Delhi, India.

henry 7 reneau, jr. is a Lindsay, California-based poet, book reviewer, short story writer, and essayist. He is the author of the poetry collection, freedomland blues (Transcendent Zero Press), and the e-chapbook, physiography of the fittest (Kind of a Hurricane Press).

Tess Gallagher’s eleventh volume of poetry, Is, Is Not, was published May 2019 by Graywolf Press. Midnight Lantern: New and Selected Poems, also from Graywolf, is the most comprehensive offering of her poems to date. She spends time in a cottage on Lough Arrow in Co. Sligo in the West of Ireland, and also lives and writes in her hometown of Port Angeles, Washington.

Lawrence Matsuda was born in the Minidoka, Idaho Concentration Camp during World War II. In 2010, his book of poetry, A Cold Wind from Idaho, about the WWII forced incarceration of Japanese Americans, was published by Black Lawrence Press. In 2019, he completed a novel based on his mother’s experience entitled, My Name Is Not Viola (Endicott and Hugh publisher).