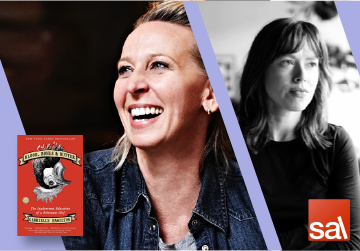 Join Seattle Arts & Lectures and Third Place Books for an evening with Gabrielle Hamilton, bestelling author of Blood, Bones, and Butter, as part of the Women You Need to Know Series!

Gabrielle Hamilton is the chef/owner of Prune restaurant in New York’s East Village and the author of the New York Times best-selling memoir Blood, Bones & Butter: The Inadvertent Education of a Reluctant Chef. Anthony Bourdain called Blood, Bones & Butter “simply the best memoir by a chef. Ever.” Hamilton also writes for the New York Times on food, memory, and the restaurant industry. Q&A with Molly Wizenberg, author of The Fixed Stars.

A self-trained cook turned James Beard Award–winning chef and moving writer, Gabrielle Hamilton opened Prune on New York’s Lower East Side 21 years ago to great acclaim and lines down the block. A deeply personal and gracious restaurant, in both menu and philosophy, Prune used the elements of home cooking and elevates them in unexpected ways. When the pandemic hit, however, and the restaurant was forced to close it prompted a reckoning that Hamilton chronicled in a deeply moving essay for the New York Times. The essay mediates on the role of restaurants in our lives while also laying bare the shaky financial scaffold that the industry is built on.

Before Hamilton opened Prune she spent twenty hard-living years trying to find purpose and meaning in her life. Blood, Bones & Butter is her memoir, which follows an unconventional journey through the many kitchens Hamilton has inhabited through the years: the rural kitchen of her childhood, where her adored mother stood over the six-burner with an oily wooden spoon in hand; the kitchens of France, Greece, and Turkey, where she was often fed by complete strangers and learned the essence of hospitality; Hamilton’s own kitchen at Prune, with its many unexpected challenges; and the kitchen of her Italian mother-in-law, who serves as the link between Hamilton’s past and her own future family.

Hamilton received an M.F.A in fiction writing from the University of Michigan, and her work has appeared in The New Yorker, the New York Times, GQ, Bon Appétit, Saveur, House Beautiful, and Food & Wine. She has appeared on The Martha Stewart Show and the Food Network, among other TV, and she has won a James Beard Foundation Award for Best Chef NYC.

She currently lives in Manhattan with her two sons.