Sasha Senderovich presents 'How the Soviet Jew Was Made' 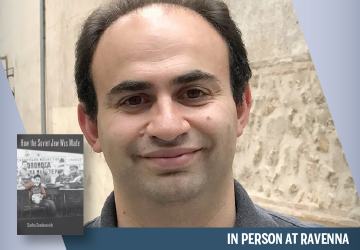 "With incisive exegesis, Senderovich develops a new reading of Soviet Jewish identity formation and expands the canon of twentieth-century Jewish writings in the process. . .an important and original voice in Jewish literary studies."—Jeffrey Veidlinger

Third Place Books welcomes UW professor Sasha Senderovich to our Ravenna store! Senderovich will be discussing his latest contribution to the field of Jewish literary studies, How the Soviet Jew Was Made. This event is free and open to the public. Registration is required in advance.

Copies of How the Soviet Jew Was Made will be available for purchase at the store. This event will include a public signing and time for audience Q&A. Sustain our author series by purchasing a copy of the featured book!

About How the Soviet Jew Was Made. . .

A close reading of postrevolutionary Russian and Yiddish literature and film recasts the Soviet Jew as a novel cultural figure: not just a minority but an ambivalent character navigating between the Jewish past and Bolshevik modernity.

The Russian Revolution of 1917 transformed the Jewish community of the former tsarist empire. In particular, the Bolshevik government eliminated the requirement that most Jews reside in the Pale of Settlement in what had been Russia’s western borderlands. Many Jews quickly exited the shtetls, seeking prospects elsewhere. Some left for bigger cities, others for Europe, America, or Palestine. Thousands tried their luck in the newly established Jewish Autonomous Region in the Far East, where urban merchants would become tillers of the soil. For these Jews, Soviet modernity meant freedom, the possibility of the new, and the pressure to discard old ways of life.

This ambivalence was embodied in the Soviet Jew—not just a descriptive demographic term but a novel cultural figure. In insightful readings of Yiddish and Russian literature, films, and reportage, Sasha Senderovich finds characters traversing space and history and carrying with them the dislodged practices and archetypes of a lost Jewish world. There is the Siberian settler of Viktor Fink’s Jews in the Taiga, the folkloric trickster of Isaac Babel, and the fragmented, bickering family of Moyshe Kulbak’s The Zemlenyaners, whose insular lives are disrupted by the march of technological, political, and social change. There is the collector of ethnographic tidbits, the pogrom survivor, the émigré who repatriates to the USSR.

Senderovich urges us to see the Soviet Jew anew, as not only a minority but also a particular kind of liminal being. How the Soviet Jew Was Made emerges as a profound meditation on culture and identity in a shifting landscape.

Praise for How the Soviet Jew Was Made. . .

"The Russian Revolution of 1917 transformed the Jewish community of the former empire. Soviet modernity meant freedom, the possibility of the new, and the pressure to discard old ways of life, all embodied in the novel cultural figure of the Soviet Jew. In insightful readings of Yiddish and Russian literature, films, and reportage, Senderovich urges us to see the Soviet Jew as a particular kind of liminal being as he offers a profound meditation on culture and identity in a shifting landscape."
—Alice Nakhimovsky, author of Dear Mendl, Dear Reyzl: Yiddish Letter Manuals from Russia and America

"With incisive exegesis, Senderovich develops a new reading of Soviet Jewish identity formation and expands the canon of twentieth-century Jewish writings in the process. This book establishes Senderovich as an important and original voice in Jewish literary studies."
—Jeffrey Veidlinger, author of In the Midst of Civilized Europe: The Pogroms of 1918–1921 and the Onset of the Holocaust

"An erudite exploration of how Russian and Yiddish writers imagined a totally new kind of person, the Soviet Jew. Senderovich shows how war, revolution, and the first years of Soviet power made it possible to construct a Jewish figure and assign it competing ideological meanings. In that way, the Jews were like the Soviet Union itself. Disciplinarily wide-ranging and original, this book will excite readers.
—Gabriella Safran, author of Wandering Soul: The Dybbuk’s Creator, S. An-sky"

"In this compelling book, Senderovich describes the new Jewish narratives that were born with the Soviet Union. Caught between the excitement of revolutionary messianism and the tragedy of mass violence, Soviet Jewish writers in both Yiddish and Russian created new Jewish archetypes that built on humor, folklore, and music and engaged with debates in Marxist philosophy. Two Jewish literary languages, in dialogue with one another, came to define a new Jewish culture with its own touchstones and ciphers."
—Amelia M. Glaser, author of Songs in Dark Times: Yiddish Poetry of Struggle from Scottsboro to Palestine

"Senderovich follows the Russian Jews as they navigated across space and time on their journey to becoming Soviet. In richly erudite readings of the most significant interwar works of Soviet Jewish literature, journalism, and cinema in Yiddish and Russian, he explores the convoluted creation process of a new Soviet Jewish identity and makes a strong case for a more nuanced and better informed understanding of the fluid relationship between the two components of this ambivalent hybrid formation."
—Mikhail Krutikov, author of Der Nister’s Soviet Years: Yiddish Writer as Witness to the People

Sasha Senderovich is an assistant professor in the department of Slavic Languages & Literatures and the Jackson School of International Studies, and a faculty affiliate at the Stroum Center for Jewish Studies at the University of Washington in Seattle. He edited and wrote the introduction for the translation, from the Yiddish, of Moyshe Kulbak's novel The Zelmenyaners (Yale University Press, 2013). Together with Harriet Murav, he translated, from the Yiddish, David Bergelson's novel Judgment (Northwestern University Press, 2017). Together with Harriet Murav, he is currently working on In the Shadow of the Holocaust: Short Fiction by Jewish Writers from the Soviet Union, a collection of stories by several different authors translated from both Yiddish and Russian; this book is under advance contract with Stanford University Press and is expected around 2024. He has also published on contemporary Soviet-born emigre Jewish authors in America. His first monograph, How the Soviet Jew Was Made, was published by Harvard University Press in 2022. In addition to scholarly work, he has also published essays on literary, cultural, and political topics in the Los Angeles Review of Books, The New York Times, TheForward, Lilith, Jewish Currents, The Stranger, and The New Republic; these are available on his website, www.sashasenderovich.com.