Mike Gastineau presents 'Fear No Man: Don James, the '91 Huskies, and the Seven-Year Quest for a National Football Championship' 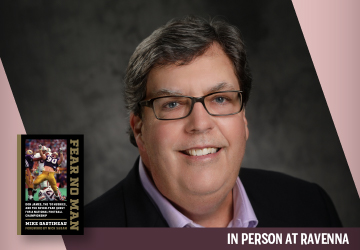 Third Place Books welcomes Seattle sports journalist Mike Gastineau to our Ravenna store to celebrate the paperback release of Fear No Man: Don James, the '91 Huskies, and the Seven-Year Quest for a National Football Championship, a must-read for any UW football fan. This event is free and open to the public. Registration is required in advance.

Copies of Fear No Man will be available for purchase at the store. This event will include a public signing and time for audience Q&A. Sustain our author series by purchasing a copy of the featured book!

In 1984 the University of Washington Huskies won every game but one, ranking second in national polls. For most coaches, such a season would be a career pinnacle. But for Don James second place motivated him to set aside what he knew about football and rethink the game. James made radical changes to his coaching philosophy, from recruitment to becoming one of the first college teams willing to blitz on any down and in any situation. His new approach initially failed, yet it finally culminated in one of the most explosive teams in college football history.

In Fear No Man, Mike Gastineau recounts the riveting story of Don James and the national championship team he built. Undefeated, the 1991 Huskies outscored opponents by an average of 31 points per game on their way to winning the Rose Bowl and a national championship. The team included twenty-five future NFL players, and in Gastineau’s gripping account they come alive with all the swagger and joy they brought to the game. A brilliant examination of one of college football’s greatest coaches and teams, Fear No Man is the inspirational story of an improbable journey that led to one classic and unforgettable season.

"Fans of the Don James era and anyone who loves college football are in for a gourmet feast. In meticulous yet breezy detail, Mike Gastineau recounts the greatest team in Washington Huskies football history. Never-before-told stories about the indomitable Steve Emtman, the irrepressible Billy Joe Hobert, and the savviness of coordinators Jim Lambright and Keith Gilbertson light up the drama of James's pinnacle achievement."
—Art Thiel, Sportspress NW

"The passage of time has made the greatness of the 1991 Washington Huskies seem almost mystical, and it takes incredible effort to humanize them while also appreciating their criminally underrated significance to college football. Mike Gastineau accomplishes this difficult task and then some in a definitive account of these national champions. This book frames properly all the dimensions of Don James's masterpiece of a team."
—Jerry Brewer, Washington Post

"Mike Gastineau pulls back the purple curtain and gives the reader an unvarnished, up-close, and surprising view of what was happening behind the scenes. If you care about University of Washington football, this is a must-read."
—Sam Farmer, Los Angeles Times

"As someone who has been fortunate to grow up around the University of Washington, I can recall firsthand how special the ’91 season was. A team and staff led by Don James, an individual who had an incredible impact on me, put together one of the most notable seasons in Husky history that will be forever remembered on Montlake. This book tells that story."
—Jen Cohen, University of Washington Director of Athletics

Mike Gastineau has worked as a Seattle sports journalist in radio and print for three decades. His books include Sounders FC, Authentic Masterpiece: The Inside Story of the Best Franchise Launch in American Sports History and Mr. Townsend and the Polish Prince: An American Story of Race, Redemption, and Football.